There are some days on the trail that just can't be beat, and we were lucky to have one of those days. The weather was perfect, there wasn't much traffic, and we ate at one of our favorite lunch spots. It was the perfect day.

We had every intention of running additional trails after Rollins Pass West, but we ended up enjoying ourselves so much on the trail that it took a lot longer than we had planned on it taking. Still, we had a great time and that's all that matters.

We started from the new parking lot at the Downieville Starbucks -- it looks great! We think they may have lost some parking, but the redevelopment was definitely a success. It was even easier to get in and out of the parking area.

We worked our way over Berthoud Pass and it wasn't long before we were at the trailhead. We had to drive a little way into the trail before we found a place to air down. We saw a bit of traffic here, but everyone got around us without any issues.

We soon headed up, and it promised to be a great day even though it was a bit chilly. It would stay chilly throughout the day, but it didn't rain until later in the afternoon when we were already almost off of the trail.

We parked at the bottom of the Riflesight Notch Trestle along with a few other vehicles there before us. Julie and Mark hiked up the left side while Walt hiked up the right side. They had been up there for awhile before Monica remembered that we actually drove to the top of it so you didn't need to hike it. Whoops!

After everyone came down from the trestle we kept going. We didn't stop when we got to the top of the trestle, but we did slow down for some pictures. The views ahead of us were amazing and we were excited to see it all again.

It was just as gorgeous as we remembered. The views above timberline were just amazing. The trail was a bit rough in places because of potholes and pipes across the trail, but it wasn't too bad. It wasn't long at all before we were at the pass and the parking area.

Some of us hiked up to the building foundation while others just enjoyed the views. When we all regrouped again we headed up Boulder Wagon Road and over to the tunnel.

This part of the trail is definitely the most fun, and we really enjoyed it. The rocky descent down to the last parking area promised to be even more fun on the way up. We drove just a little way past the parking area to about halfway to the tunnel where we stopped to gather our things.

We walked our chairs and lunches to the tunnel and set everything up right on the edge. There was a lot of traffic near Yankee Doodle Lake on Rollins Pass East, and we enjoyed watching the activity. We also enjoyed picking out other trails in the distance. We all wished that the rest of Boulder Wagon Road was still open. That would really make an amazing day, doing Rollins Pass as one, complete trail.

It didn't seem like anyone wanted to leave our lunch spot, but we eventually packed up. We brought everything back to our vehicles and then most of us hiked up to the rock house above the tunnel. We checked out the end of Rollins Pass East for just a little while, but then we soon headed back down.

We then all hiked as a group to the trestles at the end. They're just absolutely amazing, and we're always glad to see them still standing and still so sturdy. We walked over both trestles, enjoyed the view, and then walked back.

The trip up and over to the parking lot at the pass was a lot of fun, especially the hill climb. But it was soon over, and we were soon heading back.

At the big crossroads, we decided to turn left and head down and out a different way. The trail was a lot easier, and we will probably exit this way from now on.

Once we got to the end, we aired up and Monica's on-board air exploded again. Everyone pitched in to air up her remaining tires, and we discussed our day. We decided to stop in Empire to make our final decisions.

In Empire, we all decided that the rain was ruining the day, so we headed into Idaho Springs for an early dinner. It was the perfect end to a perfect day. 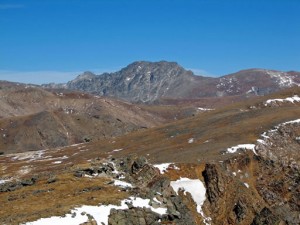 Led by Mark F.
We left Downieville at 8:45AM and proceeded via Berthoud Pass to the trailhead near Winter Park. Our intent was to drive to near Rollins Pass and hike southward along the Continental Divide to photograph the tarn lakes in the bottoms of the glacier cirques located straight down the east side…
Join Us!
If you aren’t a Member or Subscriber, you can’t see all of the content on this site. Get membership information to see why this site is best when you join and log in