It had been many years since Monica and Walt saw River House, so we were all looking forward to this trail.  It has a lot to offer, including creek crossings, sand, hills, scenery, and lots of cool remnants from near and distant history.  We started our day in Monument Valley, and finished it at River House.

The first part of the trail is so fun, weaving back and forth over the shallow creek.  Luckily, there are a lot of crossings.  We had a blast in that section, and really liked looking up at the cut in the rock for the highway above us.

It was long past lunch so we stopped at a high spot just after the "Y" intersection.  It gave us big views while we ate, which we always appreciate.  The hills there along the ridge are really cool.

After lunch, we headed off to the river view.  There was a truck parked there, but we didn't see anyone.  It was tough to get through all of the brush to see the river, so we didn't stay too long before we turned around to go back to the intersection.

The hill climb was definitely rockier than it was in 2010 when we saw it last (the whole trail was definitely more used).  That meant it was more fun, and we enjoyed the short climb to the top.

We went to San Juan Hill next, parked, and walked around.  We noticed that there was new fencing that kept us from parking farther up where we did the first time.  It was probably smart, so people didn't drive around too much.  It's a very sobering hill.

We took a 360-degree video from the start of the trail, through the sand and creek crossings, to the river view and up to San Juan Hill (before the battery died).

We wandered around the Rincone next before heading off to the River House.  It really looked the same, which was good.  It was surprising that people are allowed to wander around it, but it looked like people were respecting it and not damaging anything.  We even saw an old corncob just sitting there.  Very cool.

We drove the rest of the trail to the parking area, and we remembered that we didn't know we should hike a bit farther -- last time, we thought this was the end of the trail.  This time we followed the foot path, and we were rewarded with the big Butler Wash Panel.  We spent a lot of time there and at the river, enjoying the peace and quiet.  It was so relaxing.

But we had to head back, and the trip back to the trailhead was just as fun.  This is such a great trail!  We aired up there and headed back to Monument Valley for dinner.  It was a great day. 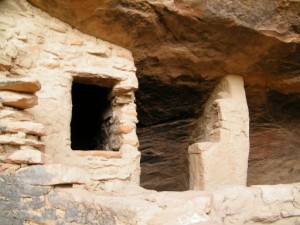 Led by Monica I.
We knew that the River House trail would take us to some ruins in a short distance, but we had no idea that the little trail held so much. We spent so much time exploring and enjoying this trail that we actually had to skip other trails we had planned…
Join Us!
If you aren’t a Member or Subscriber, you can’t see all of the content on this site. Get membership information to see why this site is best when you join and log in