We knew that the River House trail would take us to some ruins in a short distance, but we had no idea that the little trail held so much. We spent so much time exploring and enjoying this trail that we actually had to skip other trails we had planned for the day. This was one of the best trails of the whole Blanding trip.

There were two entrances to the trail. One was easy to find and the other wasn't unless you were just coming off of Comb Wash, which we were. So we took the less traveled way in and the usual way out.

The less traveled way wasn't marked and it was fairly overgrown in places. We went around cattle fencing and through the brush, enjoying the views of the highway above us where it went through Comb Ridge. It wasn't long before we popped out onto the main trail and turned right to continue along.

There were some places where you could see that people had taken the wrong trail. We followed lots of tracks and didn't have too much trouble finding the correct trail, though, as it crossed over the little stream quite a few times.

We were at the biggest water crossing when we came up to a truck on its way out. It was odd, because there were no tracks from that day that we were following. We assumed that they camped the night before.

The scenery was pretty and we were enjoying ourselves, and soon we were at the first "Y" intersection. We decided to go to the river first, so we continued along to the right.

We were surprised to find so much space by the river at the turn around. A lot of people could camp very comfortably down there. We explored for quite awhile, enjoying the river view from many places. The weather was perfect, and the leaves on the trees were only partially yellow. There was still a lot of green.

We knew we had lots of miles yet to cover, so we reluctantly continued on, back to the "Y" intersection. We made a tight turn to follow the covered wagon sign up the hill. The hill climb was fun but unfortunately it was short.

At the next "Y" intersection we went left to see San Juan Hill. It blew our minds to think about horses and covered wagons climbing the steep hill of rock. We're still talking about it. It was crazy to see.

Returning to the intersection, we continued along the trail. The Rincone was right around the corner, and we all got out to explore. It was definitely interesting, and we couldn't figure out how people got out of the river at that spot. It made for some interesting conversation.

The trail almost looked like it was finished, but it snuck around a rock to continue. That section was rocky and a bit tippy, adding some more fun to the trip. Not much farther past the Rincone was the wide spot near the fence where we stopped to check out the River House.

There are steps leading up to the ruins and it was very accessible. We all went up to explore. Monica was jumping off of a rock and tripped, getting bruised and bloody for her troubles. That was it for her so she worked her way down to the first aid kits. Everything we had expired in 2006 and nothing was quite right. We all knew to get better first aid kids when we got home.

Lunch was really, really enjoyable. You couldn't beat the scenery, and the weather was perfect. We had the place to ourselves. It was one of those good lunches.

We wanted to finish the trail to the end, so we kept going. It was tight in places but we fit through. When we got to the fence in the middle of nowhere, we turned around and were surprised to see ranchers walking around on the other side of the fence. They didn't acknowledge us at all.

The trip back was nice but uneventful. We were wondering what we'd find in the Valley of the Gods, so we headed out down the highway. We definitely need to check out the River House again next time. 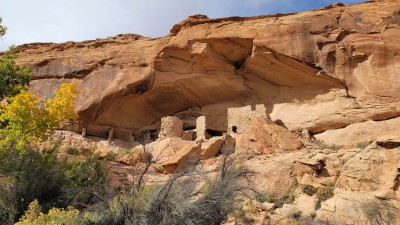 Led by Monica I.
It had been many years since Monica and Walt saw River House, so we were all looking forward to this trail.  It has a lot to offer, including creek crossings, sand, hills, scenery, and lots of cool remnants from near and distant history.  We started our day in Monument Valley,…
Join Us!
If you aren’t a Member or Subscriber, you can’t see all of the content on this site. Get membership information to see why this site is best when you join and log in