It had been a long time since we'd been on Pole Hill and we were looking forward to a revisit. We finished the uneventful Hell Canyon Road trail and Pole Hill was just up the road. We found the trailhead easily enough and didn't stop. There were lots of cars parked at the trailhead though we would only see one hiker.

The first climb is such a blast. The weather was cooperating so we took our time and took lots of pictures. It was Ben's first time wheeling in his new Jeep and he liked how it handled the twisty rocks. No one had any issues and we all had a great time right from the start.

At the optional obstacle, Monica did it first without pictures and then looped back around to do it again. This time, there were pictures. It's a great ledge obstacle just off the side of the trail and everyone did it. Ben tried to drive by it but then everyone talked him into doing it. Naturally, his Rubicon did just fine. Ben was really enjoying his new Jeep!

Julie had a good time on the way out of the optional obstacle, flexing and posing on a big rock at the end. Her Jeep looked good, and it was a great way to enjoy the optional rocks.

The trail mellowed out a bit after that, but there were still plenty of fun sections. We skipped 247A and headed for the southern loop. There were some really fun climbs along the way.

When we got to the far end we stopped at a wide spot for our annual 4th of July BBQ. It's one of our favorite gatherings. Julie had a propane grill and she was grilling up bratwursts, and everyone had loads of food to share. We sat around for an extended lunch, just enjoying the cooler temperatures and lack of rain. A huge Hummer filled with a tour group went by us twice in both directions, and they looked happy to be out there.

We couldn't stay forever, though, so we eventually packed up. We passed the Panorama Peak gate and the big campsite, and we'll stop there for lunch next time. It was a quick trip back to the "figure 8" place, and then we were off to the northern loop.

The northern loop didn't seem as rocky, but we still enjoyed it. We stopped for a while at the overlook, enjoying the views in the sunshine. It was hazy and misty in the valleys below, but we had nice weather.

There was a loop just down from The Notch so we parked off of the main trail down there. It's a weird thing, that platform. We made up stories about the first Starbucks being there until half of it collapsed and the baristas were relocated to Estes Park. It seemed like an odd place for an observation deck. Half of it is gone, but you could still imagine what it used to be.

After The Notch we headed south. We found a fun puddle that was smooth on the bottom so everyone took their turn. Julie had a huge and impressive splash and we all had some laughs. That meant we were stopped there for a short time instead of just passing through. We got to an intersection and saw a guy walking up the hill toward us. Luckily we stopped -- he was stuck in a section of trail that had eroded. We went the short distance to where he was and winched him out. It's always good to break out the winch!

After our little adventure we went back up to the main trail and headed out. What a great trail! We'll have to find our way there more often. We didn't have any issues on the way out, and we headed to the northern end of Pierson Park Road. 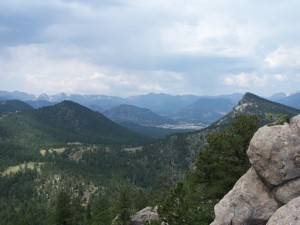 Led by Jed P.
On June 30th, some of our group ran the loop made by Pole Hill, Pierson Park Road and Johnny Park Road, but Walt and Jed could not make that run. Not to be left out they decided to run it themselves on a different day. Just like on June 30th,…
Join Us!
If you aren’t a Member or Subscriber, you can’t see all of the content on this site. Get membership information to see why this site is best when you join and log in