Trail Run on May 23, 2009
Report and photos by Monica I., Trail Leader
View trail information for Pole Canyon Rim

This was our first time on this trail, one that had been on our to-do list for quite awhile. It turned out to be almost the perfect trail -- a mix of fabulous scenery and fun challenges on a short trail very near the pavement. We'll be on this trail again, probably every time we're in the area.

But Pole Canyon Rim wasn't what we had planned for the day. We woke up to more rain, but at least Bill was fixed and with us again. Gary was riding along, and we headed out to do Thompson Canyon and explore the La Sal Mountains a bit.

The closer we got to the mountains the foggier and chillier it got. When we finally got there, we drove a little way in to the trail, slipping and sliding over lots and lots of mud. We parked at the first semi-dry area to have a discussion, and we realized that we could spend all day and not even finish a trail that muddy, and we could easily get ourselves into trouble. After some discussion we decided we'd have to save that trail for another day, so we turned around and went back to the highway.

We headed out, and Bill announced over the CB that he had lost his Jeep keys. We waited for a bit on the side of the road, but then realized that they were very lost and he needed our help. We all got out and searched for his keys for quite awhile. Then Bill's son, Tom, found the keys in his pocket.

We started going again, and we finally ended up on a trail. It was mostly dry and it started out fun, so it looked like we made a good choice. It was rocky and festive at first, and then we got to the bottom of Pole Vault.

Monica looked up it and decided just to go for it. It was bouncy fun! Everyone else took turns coming up the hill and everyone else enjoyed it. Walt had a bit of difficulty when he got off of his line and forgot he had lockers, but then once he got straightened out it worked out fine.

We got up to the top and the 4-way intersection, and then we went straight through it simply because that was the quickest way to an overlook. It was a great place and we stopped for lunch. It provided amazing scenery, even though we were surrounded by powerlines.

Once we were all settled, Gary presented Tom with the "Dumb as a Red Rock Award" for being dumb as a rock. Gary had won it himself many years before for flopping his Jeep over, and it was presented to him by another group of wheelers. Tom took it all in stride. To add to our lunch festivities, Bill made a tinfoil hat for himself.

We had some good laughs, and various people had their keys hidden throughout the day if they weren't watching them. It was definitely the running joke.

We headed back and over to the river overlook where we spent just a bit of time enjoying the view. You could see the traffic below but barely hear it.

We went back to the intersection and explored the last of the trail. It wasn't nearly as scenic or interesting. It also wasn't very long, so it was a short time before we were heading back. We took other spurs on the way back and soon found ourselves at the main road again.

Mike had to head back to town so he left us there. The rest of us headed off to see what else we could find. 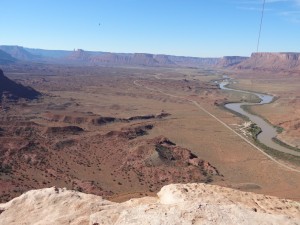 Led by Monica I.
We met at the parking area for Fisher Towers, which meant that we had big scenery to start our day. Then we headed over to the Dewey Bridge to air down and get things ready. It’s always depressing to see the remnants of the former bridge, but we always consider…
Join Us!
If you aren’t a Member or Subscriber, you can’t see all of the content on this site. Get membership information to see why this site is best when you join and log in