After finishing Flat Iron Mesa, we had a few hours of daylight left. So, we went down to Picture Frame Arch to see the arch.

Picture Frame Arch had a lot of traffic on the trail. Mostly dirt bikes, UTVs and ATVs.

We didn’t stay very long at the Arch because of all the noise of the dirt bikes and other vehicles just running all over the place. The arch was nice to see out in the middle of nowhere.

After the Arch we finished the rest of the trail and continued on back to the sand dunes. At the sand dunes, we played around in the sand driving up and down the dunes -- it was a fun time. And that was the end of the first fun day in Moab. 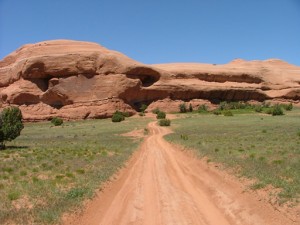 Led by Monica I.
We did this trail as part of our Behind The Rocks trip. The arches were really gorgeous and we had a beautiful day to see them. The Behind The Rocks trail heads toward Prostitute Butte about midway through the trail as far as mileage goes. We were pretty separated as…
Join Us!
If you aren’t a Member or Subscriber, you can’t see all of the content on this site. Get membership information to see why this site is best when you join and log in