Trail Run on May 13, 2005
Report and photos by Monica I., Trail Leader
View trail information for Picture Frame Arch

We did this trail as part of our Behind The Rocks trip. The arches were really gorgeous and we had a beautiful day to see them.

The Behind The Rocks trail heads toward Prostitute Butte about midway through the trail as far as mileage goes. We were pretty separated as we cruised along the dirt roads so we regrouped at Balcony Arch and Jason and Stacy decided to head back to town at that point. The rest of us went around to the other side to check out the other arch.

Picture Frame Arch is on the other side of the butte and is much bigger. Robert, Eric, Ladd and Tom all hiked up to the arch going various directions to get there, which the rest of us watched. Tom even tried to climb a little higher but the rock was too fragile.

The view from inside the arch was amazing and well worth the hike.

The road back later on was long but fairly uneventful. It would be a little difficult to find your way in coming the other direction as there are lots of spurs at the end. We were doing it in the dark so it was that much more difficult.

These were very cool arches! 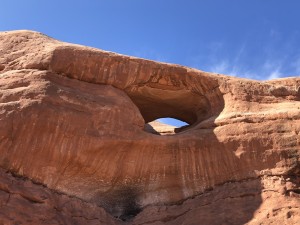 Led by Matt K.
After finishing Flat Iron Mesa, we had a few hours of daylight left. So, we went down to Picture Frame Arch to see the arch. Picture Frame Arch had a lot of traffic on the trail. Mostly dirt bikes, UTVs and ATVs. We didn’t stay very long at the Arch…
Join Us!
If you aren’t a Member or Subscriber, you can’t see all of the content on this site. Get membership information to see why this site is best when you join and log in