Phantom Canyon was our second and last trail of the day. We started at the south end of the trail down by Canon City.

Phantom Canyon is a nice and easy trail with rest stops at the start and end of the road. On the Phantom Canyon trail you get to drive over bridges and go through some old train tunnels. It makes the day very scenic.

There was only one spot on the trail that had a little snow, but none of us had any issues. It wasn't long before we were at the end of Phantom Canyon. It was still early and we had plenty of daylight left. We would all get back home before dark to end a great day and our first trail run of 2013. 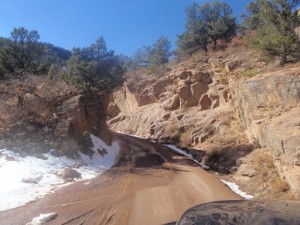