The trailhead was very easy to find. We started up, and talked with Cheryl and Dane on the phone. They were meeting us there, but they were quite a bit behind us, so we figured we'd get them on the CB once they got to the trail.

There were aspens turning yellow all around us, and it was gorgeous. It was snowing a bit, but it was a wet snow that just made things a bit muddy. The trail was very well maintained, though, and it wasn't slick.

We passed Warden Gulch and Chihuahua Gulch, planning on coming back to them. Then we also passed Cinnamon Gulch and noticed all of the mines there off of that spur. The top map made it look like there were two entrances to Cinnamon Gulch, but it looked like one might be no longer available.

When we got to the Anderson Tunnel and Shoe Basin Mines we found the gate. The mines were really cool, right up against the road. It looked like they had done some recent work there, and the cabin next to the road had gotten some recent attention. We went through the gate and closed it behind us.

The trail was much narrower on the other side. The most noteable thing was the color of Peru Creek next to the road. It was a bright blue, and the rocks in it were bright white. It looked pretty polluted with minerals from all of the mines, but it was really beautiful at the same time.

The mountains around us were covered in snow, and it really looked like winter. It was snowing just a bit, and it was pretty chilly.

We followed the trail and didn't explore any of the spurs to the mines. We figured they may be private property, so we stayed off of them. When we got to the end with the beaver dam, it almost looked like the trail continued around it, but we got out to investigate and make sure.

It looked like someone had created the illegal route, but it hasn't been used in awhile. Still, it will be years before the route finally disappears. It's through marshy areas well above timberline, and it doesn't recover very quickly. It was sad to see what someone had done.

It was truly beautiful, especially at the end past the gate. We were all gawking at everything all the way down. When we got to the turnoff for Cinnamon Gulch we took that to explore the mines.

This area is really gorgeous, and we had a fantastic time.

Use the arrows or dots to flip through the previews of the other reports for Peru Creek. Click one of them to read more and see all of the photos from that day. 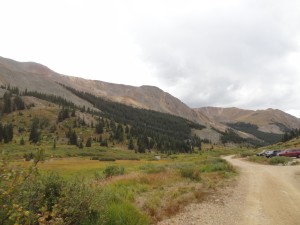 Led by Monica I.
This day was all about Peru Creek. We aired down at the trailhead before heading up to do Hunkidori Mine, and then we came back to finally do the trail. There were quite a few people on the road, and lots of campers all the way to the end. It…
Join Us!
If you aren’t a Member or Subscriber, you can’t see all of the content on this site. Get membership information to see why this site is best when you join and log in