Obviously, we'd been on the eastern side of Pennock Pass many, many times. It was how we got to Moody Hill and Crystal Mountain, along with Ballard Road, West White Pine Mountain, and Monument Gulch. How was it that we'd never been on the other side of the pass to finish the road? We planned on fixing that this time around.

We met at Sandy's and talked about the trails we wanted to do. Moody and Crystal were on the table, but we usually prefer new trails so we quickly voted to save those for another day. We soon found ourselves on Pennock Pass and at a wide spot in the trail where Matt could leave his truck and trailer. We drove by Moody and Crystal, turning onto Ballard Road to check that out along with Greer Road South.

Once we finished our exploring south of the trail we lost the rest of the group and only Monica and Roger continued to the end. Ballard Road is more than halfway to the end of Pennock Pass, so we decided to pretend the rest of the group was still with us. The trail on the eastern half is twisty and in the trees, but the western half is the scenic and interesting half.

We stopped to drive slowly by the ranger station, but we couldn't figure out what it was for and if anyone was there. It seemed like a place to stop for information, but we decided to keep going.

West White Pine Mountain and Monument Gulch are the only two trails north of Pennock Pass, and both are still closed from the fire in 2012. We got to the northern half of Greer Road and we were already looking forward to checking it out later. It looked like fun. Hurley looked interesting, too.

The views on the west side of the pass were really nice. You could see the big valley below. We planned on checking out Twin Lake Reservoir and Hourglass Reservoir at some point, but the sun was setting so we decided to save it for another time.

When we got to the wide spot at the western end of Pennock Pass we stopped to air back up. Pingree Park Road was dirt but it was smooth, so it was okay to be completely aired up. We'll be back! 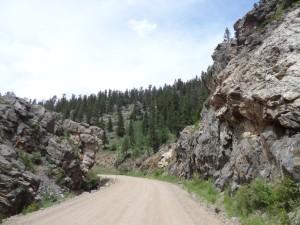 Led by Monica I.
When you check out lots of other trails along the way, it takes a while to finish Pennock Pass. It was where we started, but we didn’t see the end until late in the afternoon. It’s a nice, easy drive connecting lots of trails to each other. Moody Hill, Greer…
Join Us!
If you aren’t a Member or Subscriber, you can’t see all of the content on this site. Get membership information to see why this site is best when you join and log in