Mark had his truck and was towing his Jeep on a trailer if that gives you an indication about how easy this trail is. It seemed like it was even smoother than the last time we were there.

We did Hermit Pass first and then aired up to get back on the highway. That meant we were all aired up on Pass Creek Pass but it was just fine.

The trail was easy to find with a GPS. The place where we aired down last time at the north end was gated. We got to the trail and just kept going.

Mark's truck wasn't all that happy with the slow and steady climb to the pass at the cattle guard. We stopped for a little bit just past the cattle guard to let his truck cool down. Monica had to wrestle with the loose dirt at the side of the trail once we got going again, so she will probably be the only one to ever have a single issue on this trail. Nice!

Once we got to the pavement it was a straight shot to Alamosa. It started raining on the way there but it cleared up when we got to town. We headed straight for the brewery and dinner when we got there and everyone was happy. It was a great start to our long weekend.

Use the arrows or dots to flip through the previews of the other reports for Pass Creek Pass. Click one of them to read more and see all of the photos from that day. 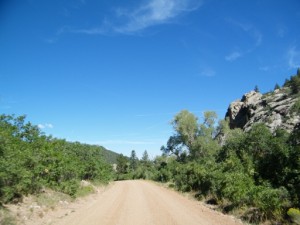 Led by Monica I.
Yes, we did this trail twice in one long weekend. We had hoped to run Medano Pass but it was closed after some washouts so we changed our plans. We’d run Pass Creek Pass to get to a new trail instead. Normally we run it in the late afternoon from…
Join Us!
If you aren’t a Member or Subscriber, you can’t see all of the content on this site. Get membership information to see why this site is best when you join and log in