When we came to the North Sand Hills back in 2004 we didn't find everything in the area. So this time our plan was to hit all of the sandy trails around the big patches as well as to explore both of the big patches.

Katie and Monica had to winch themselves up a big hill they went down after coming off of the North Sand Dunes Road, so the rest of us decided to be a bit more careful for our trek around the hills.

We started to work our way across the first patch of sand over to the second patch. There is a ravine between the two patches and we weren't feeling adventurous, so we went up to the ravine on one side and decided to do our trail in reverse up to that ravine in order to see everything. We backtracked back to the trailhead again and then worked our way out to the sandy trails around the south side.

The trails out there are away from the big patches of sand and they are pretty fun. There are lots of roller coaster sections and we were laughing about how we tended to pull up on the steering wheel when going up one. It looked even funnier later when we had our headlights on.

We went around the other big patch of sand and a dune buggy came up to Mike. We had seen a truck earlier in the evening and apparently he went down a big hill of sand and couldn't get back up. We drove over to check it out and he was down a pretty steep hill.

Walt hooked up his winch to the truck's front end and Mike and Monica tied themselves to the back of Walt's Jeep as anchors. It was a big pull but we got the truck back up to the top. We were the only other vehicles out there other than ATVs and dirt bikes so he would have really been stuck if we hadn't been out there.

We went our separate ways and the three of us went to play on a smaller hill of sand. The area was really gorgeous as the sun went down, with big shadows on the golden sand. It started to rain and a double rainbow came out as the sun set. We all took pictures and really enjoyed the scenery while we stood in the rain.

We finally got in our Jeeps and went to explore the rest of the trail. It was dark by the time we got back out to the trailhead, and we headed for our hotels in Walden.

Playing in the sand is always such a blast and we really enjoyed it. We'll be back! 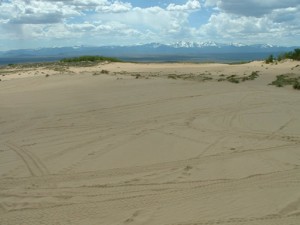 Led by Monica I.
The Sand Hills are pretty far north, almost to the Wyoming border. We’d been wanting to go play in the sand for awhile, though, so we went to check them out. It was a blast, and such a different experience! It’s good to go fast in the sand when all…
Join Us!
If you aren’t a Member or Subscriber, you can’t see all of the content on this site. Get membership information to see why this site is best when you join and log in