The Sand Hills are pretty far north, almost to the Wyoming border. We'd been wanting to go play in the sand for awhile, though, so we went to check them out. It was a blast, and such a different experience! It's good to go fast in the sand when all you do normally is go slow on rocks.

We went through the Poudre Valley and had a great drive along the river. The weather was perfect (a little chilly over the pass with no doors on). When we got to the sand we spent all day in perfect weather because it wasn't too hot (you could tell it could get really hot on that sand). There were a lot of people there with motorcycles, ATVs and dune buggies but it wasn't so crowded that you couldn't have some space to yourself.

It took us 3 hours to get there from the Longmont exit on I-25 so we had lunch and aired down as soon as we got on sand. There are some trees and shade near the entrance and the area was nice for lunch.

We spent a lot of time on the first open stretch of sand just racing around and doing donuts. There really wasn't anyone else in that area. The dogs kept digging into the sand and then laying in the holes they made (probably because the sand was nice and cool and they were running around a lot). It was funny to watch!

Then we went and played on a really steep dune. It turned out that an automatic transmission is really the only way you could get up some of the dunes, because you had to be going really fast at the bottom and then you were barely moving at the top.

There are also a lot of "waves" in the sand that prevent you from going too fast (or if you go fast you just catch air over and over). Sean had a few things fly out of his Jeep, then Ladd did too.

Sri gave it a lot of gas to try to make it up the dune. After bouncing around a lot on the bottom he made it up to the top, but then lost the front piece of plastic off of his Xterra somehow. That ended up being the only trail damage of the day.

We followed Vince around the trails for awhile, in and out of trees, then came to the next big open space of sand. This one had more hills in it and it was perfect for jumping. Sean went first and found you had to get up to about 40mph before you could really get off the ground. That meant you had to start from pretty far away and in 2High in order to get the speed. When you're coming at a hill from that far away you have a lot of time to think about what you're doing, which makes it hard.

Monica went next and didn't get as much air as Sean, but even if you only get an inch of air you're still off the ground so it's still a blast!

We left that area and played Follow The Leader a bit more, in and out of trees and up and down dunes. There were a few dunes that were way too big for us but we gave them a try anyway.

We aired up at Lake Cowdrey (a very pretty lake) and were on our way home. This area is worth the drive -- it was really something different! 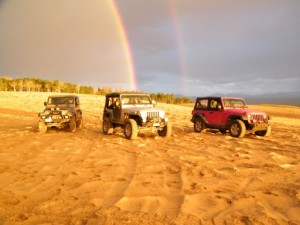 Led by Monica I.
When we came to the North Sand Hills back in 2004 we didn’t find everything in the area. So this time our plan was to hit all of the sandy trails around the big patches as well as to explore both of the big patches. Katie and Monica had to…
Join Us!
If you aren’t a Member or Subscriber, you can’t see all of the content on this site. Get membership information to see why this site is best when you join and log in