We met up at Gunsmoke Truck Stope outside of Buena Vista. Looking out to Mount Antero and Mount Princeton, we could see low clouds and the peaks of the mountains covered in snow. It promised to be interesting to get to the end of any trails today, but we were going to try.

The Mount Antero trail was very rocky so it was slow going. Still, we did not have any issues with the very rocky trail.

When we reached the start of the switchbacks, the trail had just some snowy spots here and there. We had no issues with the snow on the trail at this time, but it was early.

Near the top of the mountain, the trail got a lot steeper with deeper snow. Matt made it to the last few switchbacks but eventually had to turn around -- his Jeep just would not go up any farther. Walt was a few switchbacks back and could not make it up farther either at his position. So, we worked on getting Walt turned around. Without too much trouble, we made our way back down Mount Antero. We did have fun playing in the first snow on the mountains.

We ran into a few ATVs near the level area after the first set of switchbacks. The ATV drivers all looked very cold. And they, too, were turning around at that point because of the snow. We all went back down to the trailhead.

We went down to the creek crossing where the start of Baldwin Lake trail is. That was going to be the last trail for the day. 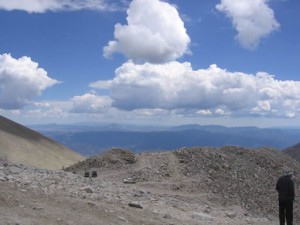