We were really looking forward to running Mosquito Pass. It's such a gorgeous trail, and many people hadn't been on it before. The weather was perfect, and we finished Mount Bross and headed over to Park City and the trailhead.

All of the rain we'd had this summer made everything very green. The mountains around us were especially pretty as we climbed up to the mine. It wasn't long at all before we were there, and everyone parked to get out and explore.

We didn't seem like such a big group until everyone got out of their vehicles. Then you really noticed how many of us there were. There were people all over the place as we all wandered around the mine to see everything.

Don and Michael in their infinite craziness actually climbed around in the mine. Luckily, nothing bad happened and they both had grins on their faces as they popped their heads out.

We stayed at the mine for quite awhile. Gary had his share of overheating problems, and it looked like his Jeep was having one of those days. He topped off some fluids and he was soon ready to press on.

We started our big climb to the pass, and when we got over the first bit of hill we found a truck trying to pull a dead truck up the trail. We got out to see if we could help, but there wasn't much we could do. Their tow strap kept breaking, but they kept tying it shorter to keep going. Soon they got their trucks to a wide spot and we got past them.

Another truck was on its way down, but we managed to get them by our group. After that, we had a clear path to the pass and we were soon there. We found a huge patch of snow just next to the trail just before we got there, too.

It was windy and chilly at the pass, and we didn't stay long. We snapped a couple of pictures and then headed down the switchbacks to the other side.

The views were amazing on this side, too. We could see the mud pit on Birdseye Gulch, our next destination. We wanted to run the entirety of Mosquito Pass, though, so we went past the end of Birdseye Gulch to stop at Mountain Lake and Diamond Lake.

It seems we were going to lose some people. Gary still had some overheating problems, and he had also broken his front drive shaft somehow. He was also struggling with a CB that wasn't cooperating, so he'd had enough for one day. Dane was heading home to get home early, and Mark was going to do the same. Mike V. was going to join them on the way out.

Walt found out he had lost 4-wheel drive, but he was going to see how bad the mud on Birdseye Gulch was before heading for home. We had a smaller group as we turned to go back the way we came and run Birdseye Gulch from the end to the trailhead.

Mosquito Gulch ended up being a really great trail, and we had a nice time. 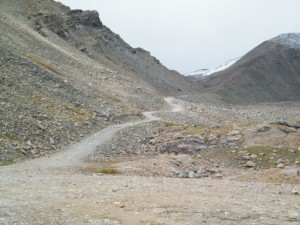