It had been pretty hot in Denver for quite awhile, so we were happy to find Moody Hill very comfortable and nice, even in the sun. We had a big group of 14 but we seemed to keep moving, even when we spent a lot of time playing in the Rock Quarry.

Dane got a late start and was pretty far behind us as we left our meeting place. We went through Loveland to pick up Perry on our way by, and Don decided to wait for Dane and catch up with us as soon as they could. We aired down at the trailhead and started up, and then we could hear Dane and Don on the CB so they weren't too far behind us.

We had a nice lunch in the sun as soon as the trail leveled out, eating a bit early so Don and Dane could catch up with us before we made our turn to go to the Rock Quarry. It wasn't long before they caught up with us and we all had a nice lunch together.

We headed out for the Rock Quarry and everyone got some nice flex on the rocks that block the path on the way to the bottom of the Quarry. Then we all got in line.

Monica went first and though she'd been on Moody Hill twice before this was the first time she made it through the obstacle. It ended up being a lot easier than she thought it was going to be, but it was still fun and challenging. What a blast!

Patrick went through it next, barely needing to slow down on the way up and over the top. He made it look easy.

Micheal tried a line a bit closer to the center of the bottom half of the Rock Quarry, and his Cherokee went right through it without any issues. Even the tight turn at the top wasn't a problem.

Bill went next and drove right through it like it was paved. It really looked like he'd done it a hundred times before.

Roger went way over on the right side of the bottom half of the obstacle, really not having any troubles. His white Unlimited looked cool on the white rocks, and you could probably see him from space pretty easily when he's in that obstacle.

Perry looked cool following Roger's line up the right side and not having a single issue. He got some great flex near the top, and it looked easy for him.

Mark and his YJ didn't have an easy time in the Rock Quarry, though. His open differentials weren't cooperating, because you really need to flex your suspension at the beginning. He really worked on it, but it wasn't going to happen this time.

Walt had been on the trail before but this was his first time on the Rock Quarry. He didn't have anything to worry about, as he drove right through it without any problems at all.

Dane wanted to be the first short wheel base up the right side of the bottom half of the obstacle, and he made it look good. He popped right up and through the rest of it, making it look simple.

Don seemed like he was on the right line, over to the left of the bottom half. He just didn't have enough clearance to make it easily, though, and he had to work on it a bit to get through the bottom half. It wasn't long, though, until he was through it and right over the top half.

Mike went next and he drove right through it without even needing to slow down, making it look the easiest so far.

It was Rob's second time on the trail and first time in the Rock Quarry, and he drove right through it without an issue. Nice job!

It was interesting to find out that the bottom half is the most difficult half, even though the top half looks the most frightening at first glance. It was really cool to see how many of us made it through the obstacle, too.

We headed out to Crystal Mountain next, enjoying the mellow and easy trail on the way there. We had a great time and great weather, and it was a blast. 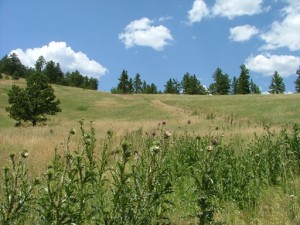