This was our first time running Minor Threat so we didn't really know what to expect. It took us awhile to find the trailhead, but once we got started it was non-stop fun on the rocks all the way to the top. Even though it is only about a quarter of a mile long it's a blast that takes awhile to get through.

We found the sign for Minor Threat by walking a little bit of Helldorado. Then we went up the hill on Strike Ravine and walked over to the edge. From the edge, we could see Minor Threat below us, so we followed that to the trailhead.

The rocks started right away, with a tight turn around some big boulders followed by a fun waterfall. A few people got good wheel stands on the waterfall, too.

Andrew started his trail damage early, losing yet another tire right after starting the trail. The mud from Kane Creek Canyon the day before claimed two of his tires. He worked on the waterfall as hard as he could, but in the end he had to get winched up it.

We enjoyed the shade at the first part of the trail, watching Eric try a fun line up the right side of the waterfall. He bounced a little after getting a good wheel stand, but then his rear end ended up moving over and he was stuck between the waterfall and a big rock. He tried to work his way around but it wasn't going to happen, so he winched his front end back around.

We saw someone standing at the edge of the Area BFE parking lot watching us, so we waved -- she waved back.

The ledge after the waterfall ended up being a fun one, and everyone took their own line through it. Kendall tried the far left side for a bit, but that wasn't going to happen in his Samurai so he had to take the right side up. Robert went up the middle of it and got a really good wheel stand.

We worked our way to Straight Edge and Andrew had a hard time making a steep turn without lockers, so he got a little help from his winch.

Monica went through Straight Edge first and found out that the line through the middle of it was just too big. She went through the right side of it and had a great time working her way to the other side.

Bob S. followed right behind and it was all going well, but then his rear tire slipped down into the crack between the rocks. He balanced on his new gas tank skid, and was glad that he put it on for this trip. He winched his way the last few feet, with little to no traction on his rear tires.

Don twisted his way through the right-side line and drove right through it, making it look easy.

Cheryl wanted to try the middle line with her longer wheelbase. She got a really good wheel stand when her driver-side rear tire ended up in the hole at the bottom, but Eric hung on to the side of her Jeep for the ride and she didn't flop over. It was impressive!

Kendall was next and we figured he would take the bypass, but he took his Samurai right through the line on the right without any issues. It was narrow and small enough to fit right through.

Eric knew the line and he flexed his way right through it without any issues at all. Bob R. came right behind him and drove through it like it was only a few pebbles in the road.

Robert wanted to do Cheryl's line through the middle and he got right on it. He got a fantastic wheel stand as Kendall hung on to the side of his Jeep and he popped right through it.

There is a little ledge just past Straight Edge that looks pretty easy but it ended up making almost all of us work a little harder than we thought we had to. It was a nice surprise.

It still took us a little while to do the trail, and we had lunch just past the obstacle. There was a little bit of shade, but it was still pretty hot. Once we were finished we headed off to the fun on Green Day. 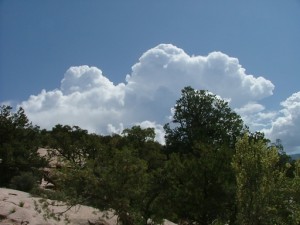 Led by Monica I.
We always have a great time in Area BFE, and Minor Threat is one of our favorite trails. It’s short and steep, and it really packs in a lot of challenges in a small space. It was a blast last time, but this time we conquered a new challenge. Before…
Join Us!
If you aren’t a Member or Subscriber, you can’t see all of the content on this site. Get membership information to see why this site is best when you join and log in