Trail Run on May 18, 2007
Report and photos by Monica I., Trail Leader
View trail information for Minor Threat

We always have a great time in Area BFE, and Minor Threat is one of our favorite trails. It's short and steep, and it really packs in a lot of challenges in a small space. It was a blast last time, but this time we conquered a new challenge.

Before we got started we walked the Helldorado trail. It starts right next to Minor Threat, and we wanted to map it out and get some pictures. That trail is pretty crazy! When we got back, some big rigs were going over the first obstacle on Helldorado on their way to starting Minor Threat. The first Helldorado obstacle is named Gatekeeper, and it's an optional way into Minor Threat.

Gatekeeper is pretty crazy, too. We had always talked about "someday" and how we'd love to have vehicles that could do an obstacle like that. We watched the other groups go through it, and then Robert decided he was going to do it, too.

The other groups watched and offered spotting help while Robert dropped into Gatekeeper. He got flexy and hit his rocker guards here and there, but he worked his way through it. You could tell that body damage was a definite possibility, but Robert escaped without any damage. It was awesome!

After Robert finished, Don jumped into his Jeep and he was suddenly starting Gatekeeper, too. Everything was going smoothly until he got close to a rock on his passenger side. His front fender flare didn't escape without some damage, but that was the only issue he had. He flexed his way through it like a pro.

Monica hurried over to her Jeep and then she was in Gatekeeper next. She got a wheel in the air here and there, and she even kept her driver's side tire on the big rock all the way through. That obstacle was a blast!

We met Walt and Michael at the usual entrance to Minor Threat and got our line situated, and then we were off and up the trail. The first section required weaving around and over some rocks, then climbing a small wall. It gave some of us issues last year, but this year we all drove right up it. The ledge after the entrance didn't give anyone any problems, either.

We worked our way over rocks and logs, and up slickrock sections. It wasn't long before we were at Straight Edge. It looked like some of the soft dirt at the bottom had been dug out or washed away, but we weren't sure if it would significantly change the obstacle.

Monica tried the crazy line that worked last year, straddling the "V" and working her way up. The obstacle was dug out enough that she had a big wheelstand and was close to flopping over well before she was over the obstacle. She tried a few different lines but it wasn't going to happen. How frustrating!

Monica tried to go straight over the ledge but it was too big. She finally had to run her driver's side tires over the rocks in order to get through it. It was definitely a frustrating obstacle this year.

Don followed Monica's only successful line and he made it look easy. Michael followed right behind him and it also looked like an easy obstacle for him. Walt played around on different lines around it and he was up, too.

Robert was determined to get up the "V" line, and he got right in it. He immediately got a huge wheelstand and his rear bumper was stuck on a rock. He couldn't back down, and he couldn't go forward on his own. He used his winch to save himself for the first time, winching himself through the obstacle.

After our adventures on Straight Edge, we had lunch where the trail finally wasn't on a hill. There were lots of gnats this year, and something was biting. Don and Robert both got eaten alive by some bugs, even with bug spray.

This is such a great trail! We finished up our lunches and headed off to run Green Day. 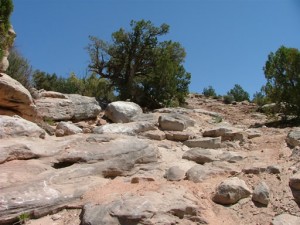 Led by Monica I.
This was our first time running Minor Threat so we didn’t really know what to expect. It took us awhile to find the trailhead, but once we got started it was non-stop fun on the rocks all the way to the top. Even though it is only about a quarter…
Join Us!
If you aren’t a Member or Subscriber, you can’t see all of the content on this site. Get membership information to see why this site is best when you join and log in