We were in the middle of our third day on White Rim when we finished it at the intersection with Mineral Bottom. We turned left to check out the end of the trail, and we hoped to make some progress into both Hell Roaring Canyon and Mineral Canyon. The road at this intersection is easy and well maintained.

We didn't drive far before we had the Green River in our sights, and then we were at the boat ramp. It was hot, and we spotted shade under big cottonwood trees near the water's edge. We parked in the lot and walked over to set up lunch under the trees.

It was a fantastic lunch, of course. We were in desert shade, our favorite kind. The water was nearby but the bugs behaved themselves for the most part. We snacked on a light lunch and enjoyed each other's company for a while before packing up.

We got to the intersection of the end trails and decided to explore Hell Roaring Canyon first. It was right along the water, and as we got farther in the trail got more narrow and less well used. We came to a secluded and cozy camp spot along the river, and the trail got much more narrow past it. The campsite allowed us to make a small loop to turn around, and we headed back.

We checked out the landing strip on the way back to the intersection. It wasn't big or fancy, but it would be a quick and relatively easy way to get to the water here.

We went into Mineral Canyon next and it was much wider. We could see evidence of old roads leading up the sides to old mining areas on both sides of the canyon. The trail was fairly easy until suddenly it wasn't. We weren't up for getting stuck on a narrow trail so we turned around about halfway to the end and headed back.

The Mineral Bottom Switchbacks are awesome! They're steep and smooth like the Shafer Switchbacks, though they are usually wide enough for someone else to pass. It was fun and very scenic to climb out of the canyon to the parking area at the top.

After that fun the trail was very straight and very smooth all the way out. It was a long drive but it was scenic. When we got to the end we aired up before heading into Moab. We'd been camping in the hot desert for two nights and we all looked forward to a shower and a bed. We had dinner but no one stayed out very late. We were the best kind of exhausted. 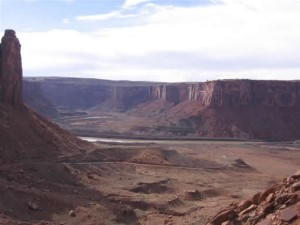 Led by Ladd G.
We hit Mineral Bottom after running White Rim, and it was our trail back to Moab. It had rained earlier in the day and we read that the switchbacks can be dangerous if wet. It looked like the trail was dry enough so we started climbing the switchbacks. The trail…
Join Us!
If you aren’t a Member or Subscriber, you can’t see all of the content on this site. Get membership information to see why this site is best when you join and log in