We hit Mineral Bottom after running White Rim, and it was our trail back to Moab. It had rained earlier in the day and we read that the switchbacks can be dangerous if wet. It looked like the trail was dry enough so we started climbing the switchbacks.

The trail is wide, and after the first climb we came to a couple of wrecked vehicles off the road. They were smashed up badly and had been there a long time. We could not really tell what they had been.

From that point up, the switchbacks and the views were great and the trail was wide and easy as long as you don't mind heights. The trail was damp but not wet, so it was fine. At the top of the switchbacks it changes into a smooth dirt road. Normally this would be one of those dust eating trails you do in two wheel drive at 35MPH. Today it was wet, and it was the smoothest trail we had been on. We found out that is was slipperier than we thought when we came up on a group of small trucks having a hard time making it up the hill. We asked if they needed help, but they said they were fine just slipping a lot. We noticed we were in about two inches of slick, red Moab mud. We kept up a good pace in four wheel high to the end of the trail at Highway 313. We aired up at the highway with both Jeeps covered in an inch of good, red Moab mud. The mud plopped off the jeeps in big clumps, leaving Jeep droppings, which continued to drop off all the way into Moab!

We had traveled a total of 141.8 miles since leaving City Market the day before. It was 4:00PM and time to head to Moab to find a place to spend the night -- we had planned on camping on White Rim and had a spot reserved, but we ended up finishing the trail instead. Entering Moab, Bob's fuel light went on, and Ladd's went on in Moab. We both took about 15 gallons of gas and spent about $6 each at the car wash next to McDonald's to get most of the mud off. Both Jeeps left mud blobs behind them for the rest of the trip. 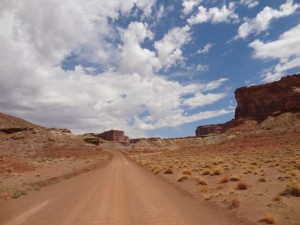 Led by Monica I.
We were in the middle of our third day on White Rim when we finished it at the intersection with Mineral Bottom. We turned left to check out the end of the trail, and we hoped to make some progress into both Hell Roaring Canyon and Mineral Canyon. The road…
Join Us!
If you aren’t a Member or Subscriber, you can’t see all of the content on this site. Get membership information to see why this site is best when you join and log in