This trail is a little difficult to find. We knew about where to find the trailhead and we thought we found it as we drove by. We turned around and it was indeed the way onto the trail.

The trail starts to climb immediately, turning into a ridge trail with switchbacks. We really enjoyed this part of the trail. The trail levels out, eventually, and we came upon a three-way intersection.

We turned right on Forest Road 252A and headed for Miller Rock. This part of the trail climbs and becomes rougher with some challenging washouts and rocks to climb over.

It wasn't long before we were at Miller Rock. We hiked back to the right side of the huge rock and checked out the view. After admiring the scenery for awhile, we continued down the trail toward the Glacier View Camp.

We knew the camp had opened on June 1st, and we were hoping the gate would be unlocked. The trail from Miller Rock to the camp is mellower -- it's a nice, little drive. We arrived at the gate and it looked locked. We really did not want to go all the way back out the trail. Walt went to the gate and saw the lock on the chain. At first, he thought the lock was locked. But then he noticed that it was unlocked. Whew!

After passing through the gate, we wrapped the chain and connected the lock just as we found it.

Passing through the camp at the posted 5mph speed limit, we were hoping that no one would mind us being there. We didn't see anyone until we were just about through the camp. A Toyota pickup was coming our direction. We waved, and they waved back. We headed down to the road and to the highway to air up.

We opted to head home to loved ones instead of going to dinner. We were both looking forward to our next run. 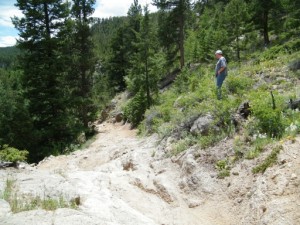