By the time we made it to Metberry Gulch, only Matt and Mike were on the run because the rest of the group had to head for home.  Just like Hackett Gulch and Longwater Gulch, Metberry Gulch had snow on the trail.  We did not have any issues with it, though.

At the "Y" intersection by the power line, we drove to the left were it was not as steep.  With the snow on the trail, it was just a wee bit challenging and fun.

Then we made it to the steep hill, but there was no snow cover on the hill.  If there would have been snow, it might have been more challenging.  We had no issues with it.

Metberry Gulch ended at a fenced-in parking area.  We stopped for a short break and walked around the river.  Then we made our way back up to the start of the trail to finish Cedar Mountain Road and end our day on the trails. 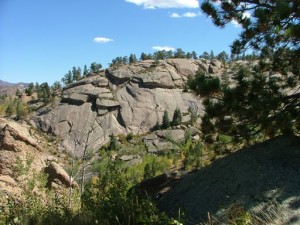