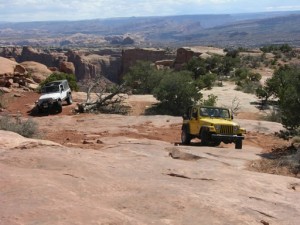 Led by Mike S.
After running Sevenmile Rim, we were anxious to sink our teeth into something a little more challenging. We went in Gemini Bridges Road off Highway 191. We met a group of nicely built buggies as they were on the way out, but they would be the only traffic we’d encounter…
Join Us!
If you aren’t a Member or Subscriber, you can’t see all of the content on this site. Get membership information to see why this site is best when you join and log in