After finishing Ptarmigan Pass we headed up McAllister Gulch to finish the loop. We had recently read that the hill on this side of McAllister Gulch was rough and crazy, so we were looking forward to checking it out. We didn't explore Camp Hale at all.

The initial climb was very scenic, with big views of the valley. It was steep, but it soon leveled off for a short time. It wasn't long, though, before the big climb started. We thought this might be one of the longest and steepest hills out of all of the trails we had been on.

The trail was dry, so the climb wasn't difficult. It may have been difficult without 4-wheel drive or low range gears, though, because it was definitely steep. If this hill was wet, it probably wouldn't be possible (or the attempt would be pretty dangerous and difficult). It seemed like it went on and on.

As we got to the flat spot at the overlook, the hill climb went from merely steep to steep and difficult. There were rocks in the trail that had become bigger because of erosion, and they were a challenge for the Jeeps without higher clearance. Monica even bottomed out over one of the bigger ledges. It was steep before, during and after the obstacle, making line-finding a very quick process.

We stopped at the overlook just after the bigger rocks and got out to relax after the big climb. We got lucky and didn't run into anyone who was on their way down. We'd most likely have the right of way because we were going uphill and we were a bigger group, but passing would have been very challenging. There were a few pull outs that could fit a vehicle or two, but it would have been an adventure.

The overlook was really scenic. We found a place where we could walk out on jutting rocks to admire the view. It was very relaxing and nice.

We eventually ended up back in our Jeeps and we started up again. We thought the hill climb was over, but we still had to climb up to Resolution Mountain. It was very steep with a rocky lip at the very top, but we all made it up to the top without any issues.

At the top of Resolution Mountain, we all wandered around taking pictures and chatting. It was breezy, of course, but not too chilly. There wasn't a single cloud in the sky, and we could see the start of fall colors here and there. We didn't really want to leave.

But we did leave, heading back down to the main trail. We continued along, and the rest of the trail was pretty mellow. We saw other ATVs, but most of them seemed to be on Ptarmigan Pass. We even saw another vehicle. But passing was pretty easy.

The descent at the end was mellow, especially compared to the initial climb. It seemed like it didn't take long at all before we were at the intersection with Ptarmigan Pass. It would be very easy to accidentally miss this intersection, but we had it marked on the GPS and we found it without any issues.

We were working our way along the rocks and creek crossings when Randy had a shock mount break and his shock hit the water. It was a soggy repair, but it didn't take him long to get the shock off of his Jeep. Luckily, we didn't hold anyone up, either. We were soon on our way.

The rocks and water crossings were fun, and we were soon back at the bridge and Shrine Pass. At this point, we turned and headed for Red Cliff. What an awesome loop! 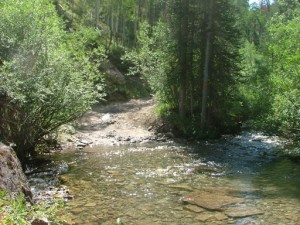 Led by Monica I.
We did this trail along with Ptarmigan Pass for a scenic day in the mountains. It was a beautiful trail and everyone really enjoyed it. We started from Shrine Pass and immediately met some ATVs coming the other direction. It was difficult getting by them so we all hoped we…
Join Us!
If you aren’t a Member or Subscriber, you can’t see all of the content on this site. Get membership information to see why this site is best when you join and log in