It's hard to believe that Mammoth Gulch hasn't been on TrailDamage.com until now. We've all been in the area so many times, but we never took the time to really document the trail. It was a short trip, and most of it was worth it.

There were people camping in almost all available spots. We joked that some of the sites probably had more people in them than the town of Tolland. It was really busy.

But even with all of the activity it wasn't long before we were at the site of the drained reservoir. Jim told us a story of putting out a camp fire that they once found still blazing, and Walt told us of how the trail used to go around the reservoir when it was still there. We hung out at the parking area for a bit, enjoying the view and the nice weather.

It wasn't long before we were off again, though, headed for the other spur. Mike remembered going to the Andrew Lode Mine in 2004, and we made our way there. Unfortunately, we found a gate and no access to the mine anymore.

All but four of us found a way to turn around before getting to the gate, but the four of us in front had to turn around there. It was difficult, like one of those puzzles where you have to move all of the pieces to get one piece out. We definitely wouldn't end up there again, at least not with so many vehicles.

With no real scenery or challenges, that fork of the trail really wasn't worth it unless we were looking for camp spots. It was a bummer to not be able to see the mine. But it meant that we were done with the trail pretty quickly so we were soon on to the next trail, Kingston Peak. 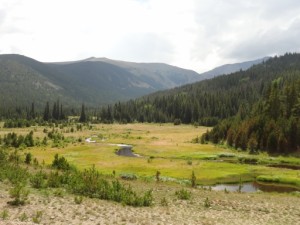 Led by Monica I.
Mammoth Gulch is a weird and cool trail. One side goes to nowhere while the other side goes to the site of a reservoir that was drained many years ago. It’s worth checking out, and we were in the area. We came off of Kingston Peak and headed down the…
Join Us!
If you aren’t a Member or Subscriber, you can’t see all of the content on this site. Get membership information to see why this site is best when you join and log in