It was fun going up and down the hill on Longwater. At times near the top of the hill the view was great.

At Longwater Rock we both went straight down with no issues after watching another group of Jeeps go down first.

The rest of Longwater was just the same thing of going up and down hills.

The cable which used to block the trail forcing you to turn around was nowhere to be found and the trail just kept going down to the river.

We stopped before we got to the river for a short break and then went back up Longwater. Just before the power lines going up Longwater we saw part of the cable that used to block the Longwater trail buried in the brush at the side of the road.

Going up Longwater Rock was easy enough, but Matt got a little tippy as he went too far to the left near the top of Longwater Rock.

The rest of the Longwater Gulch was fun and did not give us any issues. We headed off to finish the day with Metberry Gulch. 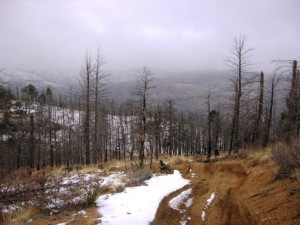