We started the second challenging trail for the day.  Longwater Gulch had some snow on the trail, just like Hackett Gulch did.

None of us had any issues with the trail until we reached Longwater Rock.  The rock slab had snow and ice on it.  We decided to have Matt go down first to see if he could make it back up the rock slab, so we could winch him back up if he couldn't make it on his own.

Matt drove down without any issues, but it wasn't as easy getting back up.  He tried a few different lines to get up the rock slab but was not having any luck with it.  Each time he tried, his Jeep would just slide to the right side of the obstacle.   So, he had to be winched up the rock slab.

We thought that it would be a good spot to turn around and go back to the start of Longwater Gulch.  Near the trailhead, we stopped for lunch.  After lunch, Niko started making his way back home while Matt and Mike went over to do Metberry Gulch. 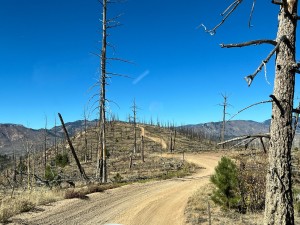