We had plans to run this trail on the way home from a wheeling weekend in Grand Junction. It's not a particularly difficult trail for our vehicles, so we figured it would take a couple of hours. We were very wrong.

We started off to a nice morning, and it was even a little chilly in the shade. There were lots of people out on the trail, though the crowd thinned the further in we went. It was a very bumpy ride, but we didn't see many people after Bull Creek Reservoir Number 5.

We were up in a big meadow just past the sharp right turn in the middle of nowhere, and Robert realized the reason we couldn't hear him -- he had lost his CB antenna somewhere. Bob and Monica stopped, while Robert went back to see if he could find it.

Bob and Monica decided to go for a walk on the trail, thinking that Robert would soon come back in their direction and pick them up. They walked for awhile but Robert never came, so they turned around and went back to their Jeeps. It was about an hour later when they got back, and it was time to go look for Robert.

They found his antenna along the way, then they found Robert right next to Bull Creek Reservoir Number 2. He had his camping chair out and he was waiting for us. His drag link had snapped in two.

He must have almost broken it on 21 Road the day before, only to completely break it on this trail. We had no way to fix it, so we manually straightened his tires and got it to the side of the trail. Then we all headed back to town.

Robert's wife had found a store in Grand Junction that had one in stock, but when we got there two hours after leaving Robert's Jeep they didn't have it after all. The second store that said it was in stock didn't have it either after we got there in person. No one had the part, and finally all of the stores closed.

Bob went back to Denver while Robert and Monica tried to figure out a plan. They were driving down a street in Grand Junction when they asked someone at a light if they had a welder. It turned out they did! We followed them back to their house and Robert welded a sleeve around the broken parts and got the drag link back together.

We headed back up to the trail and it didn't take Robert long to be back in business. Monica and Robert finished the rest of the trail in the dark and managed not to get stuck in any of the mud. The second half of the trail was definitely the muddy half, though.

At 2:30AM the next day, we headed back to Denver. It was a long drive but we made it home in one piece, and Robert's drag link held together perfectly. 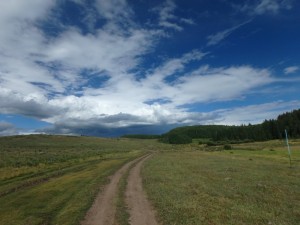 Led by Monica I.
We’d been talking about a long weekend on Grand Mesa for years, and it was finally happening.  Grand Mesa is the largest flattop mountain in the world, and it is very different than the rest of Colorado.  It’s covered in mud, reservoirs, rocky sections, tall trees, and different weather for…
Join Us!
If you aren’t a Member or Subscriber, you can’t see all of the content on this site. Get membership information to see why this site is best when you join and log in