We'd been talking about a long weekend on Grand Mesa for years, and it was finally happening.  Grand Mesa is the largest flattop mountain in the world, and it is very different than the rest of Colorado.  It's covered in mud, reservoirs, rocky sections, tall trees, and different weather for much of the year.  We hadn't had very hot temperatures in Denver recently, and that meant chilly nights on Grand Mesa and days that never got hot.  Even with the rain, we enjoyed the entire weekend, seeing 18 trails over four days -- 16 of them new to the site.  We drove up to the mesa, checked in to campgrounds and cabins, and met at the pullout next to Long Slough Reservoir to do a little afternoon and evening wheeling.

In all honesty, we didn't think the trail would take us as long as it did.  We remembered it was bumpy and muddy, but didn't remember that it took a little while to do and return from.  It meant a late night on our first night there, but it was worth it.

The beginning of the trail was rerouted, at least since we were there last.  Instead of letting us up by the first reservoir, it took us around it.  We went up to where it ended, though, and turned around.  Disappointing, but we'd see so many reservoirs before the weekend was over that it didn't really matter in the end.

The trail was lush and green, with big skies when it would open into meadows and out of the trees.  We popped over a little hill and we were happy to see that we were right next to Long Slough Reservoir.  We got out for a while just to enjoy the scenery.

It's an area very popular with snowmobilers, and there are lots of poles that eventually stick out of the snow to show where they should and should not be.  Grand Mesa gets a lot of snow, and we marveled how tall the poles were.  It must be an amazing time, zipping across the big meadows in the snow.

We knew we were running low on daylight, so we got back in our Jeeps and headed along the trail.  We found deep shade in the thick trees, with many mud puddles to splash through.  We also found a couple creek crossings that were scenic but not deep.

We stopped at another reservoir, but the evening mosquitoes were getting thick so we hurried back to our Jeeps after a short time.  Then we came around to the cabin, stopped, and wandered in to check things out.  You could stay there, but it was definitely not in good shape.  We imagined it would be a welcome bit of protection in the snow, though.  There were bones here and there, probably from a deer or a cow.

The "log bog" didn't have much mud in it, but we went slowly to avoid logs jumping up into drive trains.  After that, the trail was long without anything to grab our attention other than a few areas that had bigger rocks covered in slippery mud, followed by more mud puddles.  They alternated over and over along the way.

The trail was almost over when we came to the beaver bog.  Monica crept out into it, and she could see that it wasn't deep for most of it.  The water was clear, and she could see the rocks under the water.  It was raining, and the sun was almost down.  Then her front tires dipped down, so she slowed down to a crawl.  They kept getting more and more under water, so she backed out and chose another line that was shallow.  There's definitely a hole in the bog.

After Monica was through, Walt and Mike took the shallow line through the bog to the other side.  It was really raining at that point, and we finished the trail.  We discussed options, and decided to take Lakeshore Drive all the way around to Highway 65, passing through the gates on the Bonham Reservoir trail to get there.  It took us a while to get back, but it was still pretty awesome.

Mike had been hearing noises coming from his Jeep all evening, and when we got back to camp he discovered a u-joint that was on its last legs.  He'd end up only driving Long Slough Reservoir, passengering the rest of the trip.  It was a bummer, but he still had a great weekend. 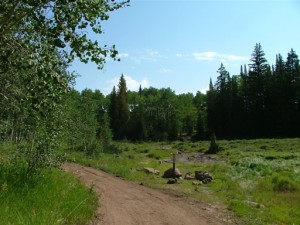 Led by Monica I.
We had plans to run this trail on the way home from a wheeling weekend in Grand Junction. It’s not a particularly difficult trail for our vehicles, so we figured it would take a couple of hours. We were very wrong. We started off to a nice morning, and it…
Join Us!
If you aren’t a Member or Subscriber, you can’t see all of the content on this site. Get membership information to see why this site is best when you join and log in