Trail Run on May 12, 2011
Report and photos by Monica I., Trail Leader
View trail information for Long Canyon

We had a lot of trails planned and some of them were trails we hadn't seen in a long time. Long Canyon wasn't new to us but we'd only seen it in the dark, so we were looking forward to actually being able to see the scenery. It was really gorgeous.

Jeffrey actually ran Long Canyon on May 21st, 2011, but he did the same thing the rest of the group did. He's included in this report instead.

We aired down and everyone snapped pictures of the Jug Handle. Then we were off. We kept a lot of distance between us because the trail was very dusty. But we had blue skies and perfect weather so it was all fine with us.

The scenery was distracting on the way up. Even looking behind us was amazing. We curved our way up the steep hill until we got to the leaning rock and everyone had a good time driving through it. This was the only place where we saw other people, a group on dirtbikes.

Pucker Pass was no problem and this time we stopped at the overlook. We were there quite awhile, running around checking things out. It was going to be a great day.

Once we got up to the pavement we only had a few miles of slow going until the next dirt path as we worked our way into the Gemini Bridges area. Everyone was in a fabulous mood because it was one of those perfect Moab days. You can't beat that. 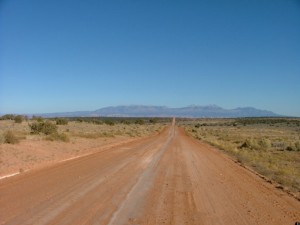 Led by Monica I.
We ran this trail in the dark, unfortunately, so we didn’t get any pictures of the majority of the trail. We did the far west end in daylight, but that’s the flat and easy part of the trail. We’ll have to do this trail again to get better pictures. It…
Join Us!
If you aren’t a Member or Subscriber, you can’t see all of the content on this site. Get membership information to see why this site is best when you join and log in