We hit the trailhead after running Chicken Corners and were immediately lost. There were apparently a lot of people that had made the same mistake as we did because we were on a well traveled trail but it soon dead ended. The side trip wasn't a total loss however, as it did take us down a tippy ledge into the streambed. After back-tracking we quickly found where we went wrong and headed up the correct canyon.

The trail was all pretty easy, suitable for a stock SUV for the most part. The one obstacle that did cause some problems was a rocky climb in the narrow canyon within a mile of the start of the trail. Roger had a little difficulty when he went through. Mike got hung up with a rock under his transfer case skid plate and rocks at his control arm mounts. After some good spotting, and some rock stacking he was through the tough part. Walt then came through, learning from the others' mistakes. He took a line that put his passenger-side tires up on the ledge on the passenger's side of the Jeep and walked right through without so much as a tire chirp.

After that, the trail was relatively easy and we found ourselves in two-wheel drive for most of the rest of the trip. The views were great and the weather cooperated by being cool but with no rain, and there was no dust because of the rains earlier. We met no other traffic on the trail until we were almost at the end when we met one pickup with a bicyclist heading in.

The weather was beginning to look threatening by the time we hit the end of the trail, with very dark clouds rolling in from the west. The Needles Overlook was completely lost in the clouds although it had been sunlit when we passed beneath it. We aired up, reconnected and hit the pavement for the long trip back to Moab. It wasn't long before it began to snow, and then sleet, and then hail. Soon the pavement was white and we were driving very cautiously as it was quite slick. We were glad that we hadn't been hit with those conditions while on the trail. It was an interesting end to a fantastic day. 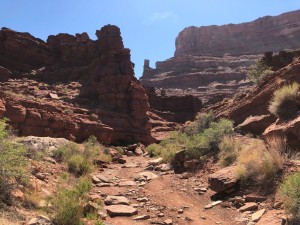