This was the first time on Lime Creek for all of us, which was a surprise. We had been near it before on Shrine Pass but we had never taken the time to run Lime Creek. We were really glad that we did, because it was gorgeous.

We started on the west end, enjoying the rocky climb. We all liked the section of rocks that you have to climb, though no one had any issues on the obstacle.

There had been an unusually large amount of snow over the winter, and that meant a lot of water in the creek. At the start of the trail, it was flowing very quickly and right next to the trail. At creek crossings, the water was deeper than it probably was most of the time. It also meant that there was a lot of water running along the trail. The water was always crystal clear.

The climb up Battle Mountain was fun, but when we came out of the trees it took our breaths away. Everything was green and lush, and the sky was very blue. It was one of the prettiest trails we'd seen in a long time.

There was a section of mud and then another creek crossing. We were turning to go up the hill below the parking area but then we saw the snow.

The hill is in shade, and it had four or five big drifts across it. We would have to travel uphill through very deep drifts, which probably wasn't possible. That meant that we would have to winch up it instead, but we had no idea how much snow was up ahead of us. We decided to turn around and explore the rest of Lime Creek from the other side.

We worked our way back out and down the hill, which was fun. It was almost a bonus in disguise to have to turn around. When we got back out to Shrine Pass, we headed off to the other side of Lime Creek and started up the hill.

The other side of Lime Creek was completely and totally different. It was a smooth and wide dirt road, and it was easy. We were cruising along, and then we came to a shady area with a bit of snow and mud. In that snow was a stuck Grand Cherokee.

It didn't take long to winch the Grand Cherokee out, and then they let us go through first to pack down the snow. It wasn't at all difficult, and they followed us through it.

This trail ended up being such a blast, and so pretty. We passed by a sign on a gate that once said "ROAD CLOSED" but with missing letters it now says "A CLOSE". This started everyone saying "the trail is a close", which soon adopted a bad Italian accent. It would be the catch phrase of the weekend.

After going back out Lime Creek to Shrine Pass, we headed off to do Benson Cabin. This weekend was starting off very well. 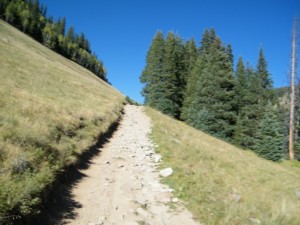