Ladd, Gary, and Bob took the Left Hand Canyon trail down the mountain from the top of Carnage Canyon trail. It was mostly uneventful. They ran across a couple of vehicles coming up the trail that made for some interesting backing up and tight passing to get around, but all in all it went well. Left Hand Canyon has been reworked over the past couple of years and it is now very well marked and all the loose dirt sections have been reinforced well. There are new switchbacks replacing the erosion-prone, steep, straight-down sections.

Ladd showed us a section of the trail now off limits that used to be open, and told us a story about some irresponsible people who got stuck after driving into an obviously impassable, very deep trench or rut in the trail. The only picture on this trail run is of this hill.

Once we reached the bottom of the trail we decided to head into Boulder to have lunch, as we were all starving since we hadn't brought lunch with us on the trail. After lunch, we aired ourselves up, reconnected sway bars, said goodbye, and headed our separate ways. 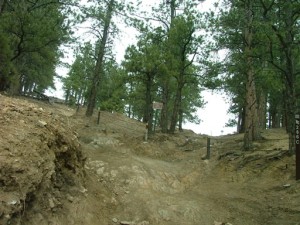