We had just been on Rollins Pass West and Byers Peak, so we figured we had time to do Jones Pass on the way home. It was hard to believe it had been five years since the group had done the trail. It was one of our first ones as a group.

It was raining, so we weren't expecting much. We got started on the trail without any difficulties finding the trailhead. It was well-marked, right next to the Henderson Mine.

The rain let up as we climbed up to the top, and at one switchback we faced the way we had come and found a huge rainbow as a surprise. The valley below us was absolutely beautiful.

Everything was green and gorgeous as we climbed to the pass. The pass itself was flat and big enough for lots of vehicles. We didn't stop, though.

The other side was also gorgeous, but in its own way. The mountains were slightly different on this side of the Continental Divide. The switchbacks were tighter, and we found ourselves in the trees a lot sooner.

There was also a Denver Water truck there, and we followed it down. They maintain this trail. The trail itself was very nice and in fantastic shape.

When we got to the bottom it wasn't raining, so we got out to stretch our legs. Everyone was very happy that we had done Jones Pass, especially after the disappointing Byers Peak trail.

We went back out the way we went in, and we were soon airing up at the trailhead. There wasn't a lot of room there, but enough room for our small group. It was chilly and everything was wet, but it was no longer raining.

We headed into Idaho Springs for dinner at Beau Jo's, and the pizza was perfect. It was a great end to a great day of scenic, Colorado wheeling. 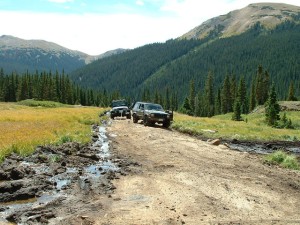 Led by Monica I.
We did this pass immediately before doing Bill Moore Lake. It was a short and non-technical trail that took us over the Continental Divide, where it was pretty cold and windy but had amazing 360? views. On the way out we stopped for quite awhile and played in a mud…
Join Us!
If you aren’t a Member or Subscriber, you can’t see all of the content on this site. Get membership information to see why this site is best when you join and log in