We did this pass immediately before doing Bill Moore Lake. It was a short and non-technical trail that took us over the Continental Divide, where it was pretty cold and windy but had amazing 360? views. On the way out we stopped for quite awhile and played in a mud bog and over a big hill. Kendall got pretty stuck in the mud, but Jordan managed to winch him out.

Kendall was rewarded with a slight crunch in the side of his fender. Dave got some mad flex shots on a rock and we all got a chance to mingle. 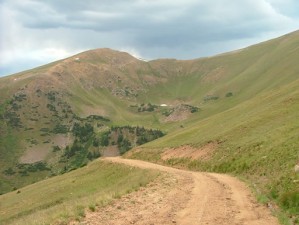 Led by Monica I.
We had just been on Rollins Pass West and Byers Peak, so we figured we had time to do Jones Pass on the way home. It was hard to believe it had been five years since the group had done the trail. It was one of our first ones as…
Join Us!
If you aren’t a Member or Subscriber, you can’t see all of the content on this site. Get membership information to see why this site is best when you join and log in