We did Jenny Creek in the middle of doing Rollins Pass East, like usual. We kept expecting to see a big group behind us, but they never caught up to us after we passed them at the trailhead. We saw lots of other vehicles, dirt bikes and ATVs, though. It made it a bit crowded at times but it never got really bad.

It was a bit muddy on the trail, but that just kept things interesting. The creek wasn't too deep, and no one had any issues getting through it. Getting out of it, on the other hand, was a challenge.

The rocks were a bit more dug out since the last time we saw them, and the mud on them and around them kept everyone sliding around. 4-wheel drive was definitely necessary, and some people used their lockers to get through it. We were all humbled when Michelle drove through it without any issues. Nice driving!

Unfortunately, Walt wasn't going to get through it so easily. He got pretty hung up on the rocks, and ended up with a tire hanging in the air. His Blazer wasn't going anywhere, so he winched himself a few feet forward and out of it.

Like always, the rest of the trail is just about perfect. We drove in and out of the clear water of the creek, following the trail as it took us in and out of the water. We found a nice place to have lunch at an old cabin, and we all needed bug spray because of the mosquitoes. Lots of people went by as we ate. The sun was out, and it was a great lunch.

The trail ended too soon, of course. That's the only bad part of Jenny Creek -- it's not very long. We soon popped out next to Yankee Doodle Lake. We didn't see any snow, though the slick mud made it fun. It's always going to be one of our favorite trails. 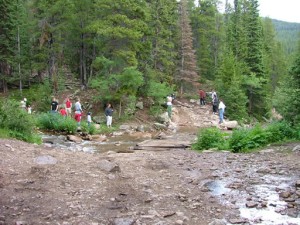