Our last trip to Italian Creek found us on Reno Divide but skipping American Flag Mountain, so we planned on reversing that this trip. We had spent a wonderful morning on Cement Creek, and we turned onto Italian Creek already smiling. The place was packed with bicycles, ATVs, hikers, dirtbikes, and other 4x4 vehicles. A truck full of bicycles and passengers even went by, taking them to the top so they could have an easier ride down. Even with the constant parade we had a great time.

The first section of the trail is mostly in the trees, and it was cool and shady. We worked our way through groups of bicycles and kept climbing. It was noon and we found a wide, flat spot for a nice lunch. Then we kept going.

It was a quick trip to the fence and gate at the intersection with Reno Divide. When we got there, a parade of dirtbikes and ATVs were there. A nice guy opened the gate for us, and we stayed on the Italian Creek trail. We'll do Reno Divide again but it won't be until the next time.

The section of Italian Creek between the Reno Divide intersections is almost always narrow. There were very few places to pass. Luckily, it seemed that the parade was up on Reno Divide because we didn't see anyone. We stopped at the overlook for a bit to take pictures and stretch our legs, and we had it to ourselves.

After the overlook we started out again and it started raining. Then the lightning and thunder started, and the storm was close. It got chilly, but luckily it didn't last for too long. We all spent time putting our Jeep tops up and then down and then up again.

The intersection with Reno Divide meant that the trail was going to open up, and it did. We were out of the trees for a while, and back with the parade of other people enjoying the trail. We passed by the Stewart Mine and talked about the last time we stopped there for lunch. It's definitely a nice spot.

And finally we were at American Flag Mountain. We headed up and managed not to find any traffic coming down. It kept getting chillier and windier, and by the time we got to the top it was really windy, 55 degrees, and raining. It really felt like summer was ending. We enjoyed the scenery anyway, and watched people come up to join us.

But then the weather changed. It stopped raining, the wind mellowed out a bit, and the sun came out. Perfect! We stayed even longer taking more pictures of the scenery. There is another wide, flat spot halfway down and we stopped there too for more pictures and hanging out. Monica's sway bar link had come undone so Walt loaned her a cotter pin.

It was really nice on the mountain but we finally agreed it was time to head back down. We made it back to the main trail without having to dodge uphill traffic, and soon we were on our way.

We were following the forest service's motor vehicle use maps, so we took a spur to Star Mine that they had mapped. We didn't make it far, though, because it was closed halfway up by someone other than the forest service. It was very difficult to turn around, and we discovered barbed wire in the brush in the process. Luckily, no one got tangled up in it and no one was hurt. We worked our way back to the main trail.

At that intersection there was a nice, deep puddle of muddy water. We normally avoid those, but something was weird that day. We went back and forth through it multiple times like we didn't know any better. Each of us ended up with muddy water related issues by the time we were done. Lesson learned (again)!

After the mud puddle we headed out around the private property and out to the main road. It seemed to take forever. Three of us mapped the way back to Crested Butte on our GPS units. Bob's said it was 20 minutes, Monica's said three hours, and Ben's was in between the two others. We talked at length about different routes back to town, but in the end we just took the easiest way.

At county road 742 we turned right to head back. We discussed wandering around on the trail that goes by Boston Peak, but we were really out of time. We went by Taylor Park Reservoir and out, and we got back to Crested Butte in time for dinner before the restaurants closed. It was a great day! 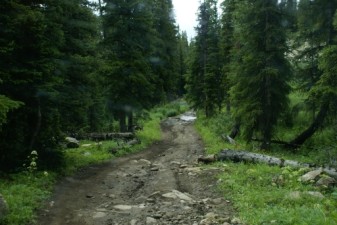