After lunch it was time to give the Ironclads trail a try. Route finding proved to be a little difficult, but we finally found the Forest Road 216 sign telling us we were on the right track.

We started climbing on the trail to the first rock ledge. This proved to be no problem for Walt or Mike. We continued on to the intersection for the loop. We turned right at the loop and then we started climbing a steeper, loose hill which was a lot of fun. Soon we reached 216A.

We turned right on 216A and started climbing some more. We accidentally missed the Play Hill heading up the left side of the trail, unfortunately.

Before we knew it, we were at the Window, but there was a problem! It seems that Mother Nature blew down a couple of trees. One tree was at the start of the Window and another one was at the top at the exit from the obstacle. Both trees were huge.

Walt knew his BlaZeR2 was no match for the Window, so it was up to Mike to decide if he wanted to use his tree insurance, a chainsaw. There was no tracks through the Window at all, showing that nature had closed the obstacle very well. Mike decided to let Mother Nature have her way and we continued on, skipping the obstacle and leaving the trees alone.

It felt like we had just gotten started and we were already at the end of the trail. We hiked a little further to enjoy the view.

On the way back down we took the left side of the trail. We were not going to miss the Play Hill again. After looking at the options, we decided the middle route looked liked the most fun.

Mike spotted Walt down the Play Hill and it was definitely off camber and tippy. The front passenger tire of Walt's vehicle dipped down into a hole and he got a good rear wheelstand. It eventually settled back down and Walt went the rest of the way down the hill without any issues.

Walt then spotted Mike down the same line. Mike flexed really well and never lifted a tire, but his Jeep was really light when his front passenger tire dipped down into the hole. Mike also went down the rest of the hill without issues. At the bottom of the hill, Mike mentioned that off camber downhills were no fun! We took the middle because it looked like the most fun, but maybe it wasn't.

We headed back down and finished the rest of the loop, and we found a fun little ledge. We returned to Bunce School Road and headed out. 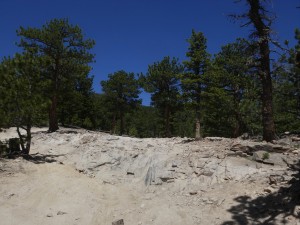