For this short trip, Julie had to rent a Jeep in Moab as hers was still in the shop for engine warranty work. She enjoyed the rental but missed her own ride!

Hurrah Pass was the first trail of the two-day Moab trip. It was sunny outside and was going to be a hot day. We aired down just before the road turned into dirt.

We did not see a lot of traffic on Hurrah Pass. Just a few passing cars and some people on bikes.

Hurrah Pass is easy going up to the top of the pass, where we stopped and took in the great view and had a short break.

After that, we continued down on the other side of Hurrah Pass.

The back side of Hurrah Pass was also easy going and none of us had any issues. We did run into one gate that was closed. So, we opened the gate and went through and closed the gate after us. Then we headed off to Lockhart Basin. 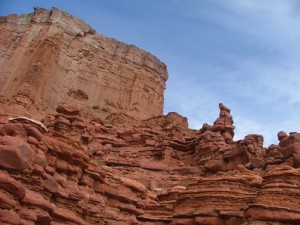 Led by Monica I.
We started our Moab trip off with a mellow day, and the weather was just as mellow. It was the end of May and it was probably around 75 degrees and cloudy. That’s strange weather for Moab that time of year. Still, it looked like it was going to be…
Join Us!
If you aren’t a Member or Subscriber, you can’t see all of the content on this site. Get membership information to see why this site is best when you join and log in