We had already run this trail a month before, but it rained so hard in the afternoon that we had to cut our day short. The weather looked good this time for a repeat run in the area, and we started in the cracks on Hidden Valley Road. It really is a fun trail, and everyone enjoyed themselves.

We aired down just after the pavement turned to dirt on Jackson Creek Road, and then headed up to Hidden Valley Road. We found the turn and drove through the housing area. When we got to the bridge, we dipped down into the creek instead.

There were tracks in front of us but we didn't see anyone else on the trail. It wasn't long before we were at the first set of cracks. Everyone twisted their suspensions through the area, testing to see how much they could get.

The second crack was another great flexing opportunity, and everyone took it. You had to stay pretty high on the side of the road to avoid the ditch at the side, and everyone managed to avoid it but Matt. He got a bit too close and fell right in, but he immediately had a smile on his face. He didn't damage anything and had a fun time working his way out of it.

We all worked our way up, and there was a new crack after the turn that we didn't remember. A few people played in it, getting a little wheel stand before finally climbing out.

We all remarked that it really is a fun little trail and a great way to get to Rampart Range Road via Dakan Road. It wasn't long before we were at Dakan Road, either. Hidden Valley Road really is a blast! 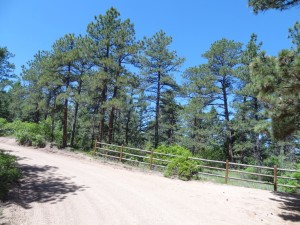