After running Cliff Hanger we were ready for some serious slick rock, and Hell's Revenge promised to deliver! We hit the trailhead at around 1:30 PM. We were already aired down and disconnected so we didn't even stop as we turned off Sand Flats Road. We took a few pictures on the first fin and moved on. Lake Michigan was bone dry, so there were no issues there. We stopped at the overlook of Lion's Back and there was no activity there so we moved on. Here it was, Friday afternoon in Moab, some of the best weather we've seen there, and no one on the trails. It was beginning to seem weird.

As we proceeded we could see the black tire marks of the trail stretching out in front of us going up and down the slick rock domes. This was promising to be a larger version of Fins & Things. After climbing and descending several domes, paying attention to staying between the lines (just like kindergarten!), we reached the turn off for the overlook. We drove out to the overlook, enjoyed the view and then followed the painted hash marks to the left. We soon came to the top of a steep V-notch that proceeded down to a sandy wash. It looked tough, but thinking once we reached the bottom all we had to do was follow the wash back out to the main trail, we each went down. With careful spotting, it was not as difficult as it looked.

Imagine our surprise as we proceeded out the wash to find ourselves at the bottom of Hell's Gate. That's what we get for not printing out the trip reports and studying them because the book we had doesn't mention this loop or Hell's Gate at all. After considering the option of going back up the way we came down, we decided it was better to tackle Hell's Gate. After all, people do drive up it and make it -- at least most make it anyway. Having seen the video of Tracy's Roll, we knew that this was probably the most difficult slick rock obstacle we had ever tackled. Roger was in the lead, so Mike spotted him as he drove right up to the top. After getting to the top, Roger remarked that he was so intent on the challenge that he forgot to use his lockers, proving that you don't need lockers for some of these challenges.

Mike was up next, and since Roger had made it, the challenge was on. Roger did a great job of spotting, and there was only one close spot where Mike got high on wall on the passenger's side and lifted the tire. Mike didn't realize it until after he reached the top, which was just as well. There's a very small margin of difference between a good line and disaster on this obstacle and it deserves a lot of respect. Amazingly, both Mike and Roger were able to balance the need to spot with the "need" to get photos. It worked out this time, but next time, if there is a next time, the recommendation is to forego the photos if there's only one person to spot.

After some high fives, we moved on having taken an obstacle that we would have by-passed if we had more sense. We kept moving at a pretty good clip after that, but a highly modified Jeep that was really making time passed us and left us behind. We went above the Black Hole and came up to the Car Wash. We marveled that anyone would drive into it, and actually make it back out. We'd like to be there to see "the big boys" playing some time. We went over to the Bath Tub and Mike and Roger both played around in it taking photos. We went by Mickey's Hot Tub, down Whale's Tale and were soon at the bottom of Escalator.

After Hell's Gate, we though it might be tempting fate to try Escalator, so we were content to try and walk (climb) up it. It was too steep to even do that without more effort than we were willing to give it. Since there were no other vehicles around to watch we again moved on. Tip-Over Challenge turned out to be no trouble for either of us as we each climbed right up it.

After Tip-Over Challenge we made a wrong turn, going up the chute to the left and managed to miss a mile of the trail including Rubble Hill. After realizing that this was what we had done, we decided to continue on out, leaving something to do the next time we take this trail, because it will be a regular.

The last challenge was the tippy section with the overhanging rocks on the left. The short wheelbase was decidedly a benefit here as it was tight but there was no contact. Roger managed to scuff the corner of his soft top but made it through with no real damage.

We exited out to Sand Flats Road with another most excellent day of wheeling behind us. Again we retired to the hot tub, scotch, and cigars after a good meal at Eddie McStiff's.

There were finally a few more jeeps in the parking lot, it being Friday night and there was promise for more company on the trails for Saturday's run on Behind the Rocks. 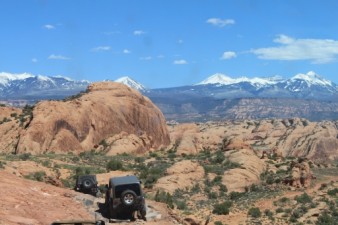