Most of us had seen this trail before, but only Walt and Mark F. had been on it before. It's odd -- we never thought much about exploring there. The sign pointed to Hall Valley Campground, and we figured that's all it was. We were definitely wrong about that.

It's good to know that a nice area for airing up or airing down is available at the campground, and that there is a pit toilet there. We did a circle through the campsite and then continued along the trail.

It started out bumpy and soon turned to rocky. There were lots of places to camp, and everything was full. We soon saw a large campsite that didn't have anyone in it, so we pulled off for lunch. It was a good lunch in the sun. We were all a bit chilled after standing in the snow up on Webster Pass.

After lunch, we continued on. The rocks were fun, and a few were unavoidable. There were even a few larger ones to crawl over. When we got to the spur that goes to the mine, we discussed things. Rich didn't want to drag his Commander through the tight brush, so he stayed behind. Eventually, everyone else decided to go to the mine.

The trail on the way there was either fun or a nightmare, depending on how you look at it. The brush scraped against our vehicles the whole way there, but the rocks in our way were a blast to climb. In one spot, rocks tipped us very far over to one side, testing our nerves. Just getting to the mine was an adventure.

When we got there, the parking area was full of dirt bikes. We weren't sure where we were going to fit all of our vehicles. They soon ran over to move their bikes to one side, and we all fit in. They were nice to visit with, and they stayed there almost as long as we did.

The mine was nice, but the scenery was nicer. We didn't want to leave. This would be a really nice place for lunch, and just to hang out.

Rich was waiting, so Mike headed back to keep him company. A minute later, Rich told us on the CB that a vehicle was headed in. He didn't see Rich trying to warn him. Somehow, Mike managed to let him by, but then the other vehicle turned around in the same spot. Once they were both out, we also headed out after the dirt bikes.

Bob left us at that point, and the rest of us continued on. We went up to the gate and circled around to head back down, without getting out. After the scenery at the mine, this didn't compare. It's too bad that the area is closed.

The trail was bumpy but fun on the way out. We stopped by the pit toilet and headed out to check out Beaver Creek Road. Hall Valley is definitely one we'll be doing for years to come. 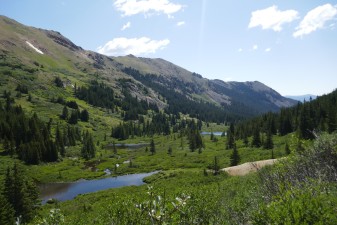 Led by Monica I.
We had a great day planned — high, mountain passes, gorgeous scenery, and lots of mining history. We met in Conifer and headed to our turnoff on the county road. We weren’t too far down the washboard road before we decided to pull over and air down there in a…
Join Us!
If you aren’t a Member or Subscriber, you can’t see all of the content on this site. Get membership information to see why this site is best when you join and log in