We started our day with a trip to Hagerman Pass, but we were turned away well before the pass by a very big snow drift. It'll be awhile before that trail is passable with a 4x4 vehicle. The views were gorgeous, though, and it was a good start to the day. It wasn't long before we were on our way to Halfmoon Creek, hoping for better luck.

We got to the trail and found lots and lots of campers. The early section of the trail was packed with people. It was almost lunch time when we were passing a rare empty campsite, so we pulled in for a fabulous lunch next to the creek. When we went by this campsite again later in the day it was full, so we got lucky.

When we got to the crossroads, we decided to take the south fork first, so we could get on the rocks as soon as possible. The first water crossing was much deeper than it was the first time we were here. There was a record amount of snow over the winter and there is water everywhere. It was a blast!

The muddy section after the first water crossing had two paths. One was pretty easy and the other had a short but slick wall of mud to climb. No one even bothered to try that path, so it wasn't too long before we were moving on.

As we climbed, the weather was turning. It was getting chillier and the clouds were rolling in. Afternoon rain was in the forecast, and it looked like the weatherman had it right this time.

We had a moment of confusion when we had a short wall of rocks across the trail in front of us, but we knew the trail kept going. A brief step out of our vehicles confirmed that the trail crossed this short barrier and continued on the other side.

We were getting closer to Iron Mike Mine when we came to some snow across the trail. We saw some vehicle tracks from someone who had attempted it, but they didn't have any luck. It was too big, and we weren't going to attempt it, either.

Everyone got out and we had a great time exploring. There was another, bigger drift across the trail just past the one we were at, so the trail was still pretty impassable to 4x4 vehicles. But the views were gorgeous. There was snow all around, and patches of wildflowers in the green grass of the tundra. Don managed to walk across some snow that covered the creek and not fall in, too.

We had to turn around, so we worked our way back to the crossroads. The rocks were fine downhill, and the water crossings were just as fun. Steve had a long way back to his campsite so they left us at that point and the rest of us continued on.

As we started the north fork of the Halfmoon Creek trail it started to rain. It was also getting pretty chilly. The rocky sections on this side of the trail were much easier, and the third water crossing was fine. However, the final water crossing was very deep and wide.

It started hailing when we got to the final water crossing, and Mark decided to wait for us there. The rest of us carefully crossed through the water and no one had an issue, though it was very deep.

The Champion Mill was impressive and very pretty, but it was raining and no one got out to explore. We snapped pictures from our vehicles and then we turned around to head back.

As we returned to the big water crossing, some other vehicles were at the other side. We all stopped, and then they went through first. They had a Jeep Cherokee XJ with them that didn't make it far before it quit on them, though we never found out why. They used a tow strap to drag it back out of the cold water, working in the rain. It wasn't long before it was our turn, and luckily we made it back through without issues.

We met up with Mark again and worked our way out. It finally stopped raining, and everyone enjoyed the third water crossing again with its fast-moving water. It wasn't long before we were off of the trail, and Mark left us then to head for home.

The rest of the group headed into Leadville for a fabulous and inexpensive meal at Quincy's (now one of our new favorite restaurants). Even though we only did one trail, it was a great trail and everyone had a fabulous time. 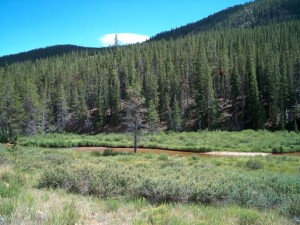 Led by Monica I.
This was a gorgeous trail with a little of everything. One of the obvious differences from so many trails is how clean and well-kept it was. It was tucked away past a very busy campground and we only saw a couple of vehicles. Perry was supposed to join us but…
Join Us!
If you aren’t a Member or Subscriber, you can’t see all of the content on this site. Get membership information to see why this site is best when you join and log in