Monica, Mike, and Walt had been on the Hahns Peak trail back in 2006, but it was covered in snow during that time. We didn't get a chance to go to the top of Hahns Peak during that trip because the snow stopped us, so we were motivated to get to the high point this time. We came off of the Farwell Mountain trail and headed for Hahns Peak.

We had hoped to find the time to do many more of the trails that spur off of Hahns Peak, but we had to pass by them this time. It was a bummer to keep driving by new trails. There's always a "next time" so we just had to wait for that.

We had stopped by the forest service office in Steamboat Springs on the way to our cabins on Seedhouse Road, and they told us there was no sinkhole on the trail. That section was open, they said. So we weren't worried about it. When we got there, we found the sinkhole filled with rocks and logs, but not completely repaired. It seemed like something worth mentioning, though, and we were a little surprised. We would try to remember to call them and wish them a "happy sinkhole denial" on May 5th next year.

We took our time going over the sinkhole but it ended up not being a big deal. It was really filled in well, and our Jeeps are not very wide. A wider truck might have issues, though, and it could really derail a dirtbike if the rider wasn't paying close attention.

Just up from the sinkhole was the spur up Hahns Peak. Walt remembered driving much higher up the mountain, so he must have gone up the other spur while it was open to the public. The spur that went around the north side of the mountain to the Royal Flush Mine was private property now, leaving only the spur that took us halfway up.

After dinner we headed down and did some wandering around to catch the rest of the trail. It was nice in the trees though it wasn't as scenic. Still, it's a nice trail that covers a lot of area, and we enjoyed seeing it not covered in snow. 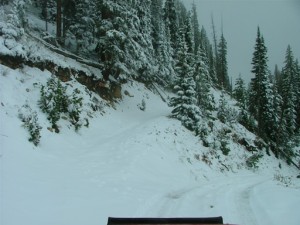 Led by Monica I.
Hahns Peak was going to be the first trail of our last day in the Steamboat Springs area. We were hoping that there wouldn’t be too much snow for our climb over the side of Hahns Peak, or at least not so much snow that we’d have to turn back….
Join Us!
If you aren’t a Member or Subscriber, you can’t see all of the content on this site. Get membership information to see why this site is best when you join and log in