Hahns Peak was going to be the first trail of our last day in the Steamboat Springs area. We were hoping that there wouldn't be too much snow for our climb over the side of Hahns Peak, or at least not so much snow that we'd have to turn back. We had a great breakfast at the Steamboat Lake Outfitters (SLO) before heading out to the trail just a few miles north.

We got a good start and right away we were having to verify that we were on the right road seemingly every few hundred yards. There were lots of spur roads, and many of them weren't marked. We only chose one wrong road, though, and luckily that ended at a gate right away. We just kept picking the spur that went uphill and we did fine.

The climb up was pretty snowy but we did okay. We got to the first wide spot on the climb, discussed it, and decided to keep going. Some of the sections were near the cliff's edge but we felt pretty safe. The snow wasn't too icy or deep.

We made it all the way to the top and found the final spur that got the closest to the top. It was really steep and narrow, and we knew it would be really stupid to even try it. We kept going.

We worked our way down and to the next wide, flat spot. Then someone showed up and asked if we had a shovel. Some people were out in a late model Suburban on street tires, and they were in trouble.

They borrowed a couple shovels and some of them started digging down to the dirt in a long strip. The driver brought the Suburban down to where we were so he could get turned around so they could get back out.

It took Mike and his winch a lot of time to get the Suburban turned around. It was just too slick for its tires, and the driver was new. He finally got turned around and we wished him luck. Mike went up to the flat spot at the top ahead of them, just in case they needed winching.

It didn't start out too well, but then someone else got behind the wheel and the Suburban powered its way to the top. Mike watched them go down the other side, then returned to us. We continued on.

The last downhill bit had really deep snow (maybe a foot or a bit more) and it was very packed. It made the descent a little bit better, and soon we were in the open area. We were surprised to find bare trail here.

We worked our way back into the trees and found more snow as we went over part of Twin Mountain. The descent was snowy but we took our time and it went just fine. Luckily the snow was melted in some of the places where it would have been pretty bad otherwise.

We were considering doing the Farwell Mountain spur, but then when we got there we thought the better of it and skipped it. It was just too snowy to be up there.

We checked out the Farwell Mine (a trough and a hose, basically) and continued on. The mud in the meadow was really slick, and we all worked our way through it, sliding all over the place. No one got stuck or anything, though, and it was pretty fun.

We had a nice lunch at the top of the last muddy hill. The sun was out and we were enjoying some blue sky for the first time since leaving Denver. Some ATVs went by, but other than that we didn't see anyone else. We also saw horse tracks in the mud but didn't see the horses.

We passed through the forest service gate and continued on until we were in town. The views were spectacular and we were a little sad to leave. We went down the road a bit to check out Seedhouse Road on our way home. It was a great day of all different weather. 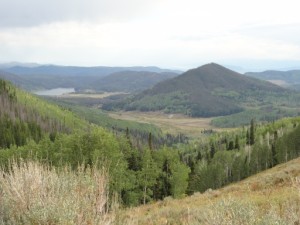 Led by Monica I.
Monica, Mike, and Walt had been on the Hahns Peak trail back in 2006, but it was covered in snow during that time. We didn’t get a chance to go to the top of Hahns Peak during that trip because the snow stopped us, so we were motivated to get…
Join Us!
If you aren’t a Member or Subscriber, you can’t see all of the content on this site. Get membership information to see why this site is best when you join and log in