Soon we made it to Hackett Rock.  It was fun driving up the obstacle.  After we all made it to the top without any issues, we stopped for a short break.

Then we made it to the "Y" intersection in the trail and we went left.  We all went down the big rock ledge and drove to the river, next.  After we walk around for a short time, we went back up to the intersection again and went down the right fork this time.

At the end of Hackett Gulch, Walt ended his day of four-wheeling because he was not feeling well.  The rest of us headed over to Longwater Gulch. 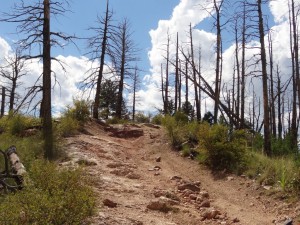 Led by Monica I.
Our 4×4 group got in full swing after the Hayman Fire that burned up so much of the Gulches. As a result, we hadn’t done the trails before the fire and we rarely did them since they were reopened. We’d heard that they were opened to the other side of…
Join Us!
If you aren’t a Member or Subscriber, you can’t see all of the content on this site. Get membership information to see why this site is best when you join and log in