Only a couple of us continued on to do Guanella Pass after spending the day on Argentine Pass and McClellan Mountain. We were expecting the old, pothole-filled road we had been on in the past, but we were pleasantly surprised.

The first part of the road was still awful, with lots of potholes to avoid. Then, the road turned to new pavement with a curb on the side. Soon, that pavement was smooth, black pavement with more curbs, nice retaining walls, many pull-outs, and expensive fencing. Wow!

This isn't a trail anymore, if it really ever was. It's suitable for any passenger car, as long as you take your time in the pothole sections at the beginning and end. They've really done a ton of work on this road.

The overlook had two very nice parking areas with pit toilets. They are still working on this area, fencing it in. There is also a hiking trail that goes to the top of the pass.

This ended up being a very quick ride to Grant, even with our stop at the overlook. We were surprised that we didn't see more people. It was a very nice ride to the other side to air up. 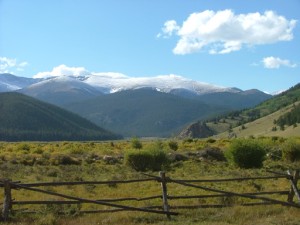