Mud on Green Ridge? No way! It was September, and we weren't too far into the northern end of the trail before we found a nice, big mud puddle. It was tough to say for sure, but we guessed we were in for a muddy trip back to the highway. Mud is always a fun time but it seems to cause more vehicle damage than it's worth. Fingers crossed, we worked our way south.

We passed through mud puddle after mud puddle, and it was a nice break to find a fun, chunky downhill section. We had a great time working our way up the Rock Hill on Bald Mountain, but can you ever get enough rocks? We were aiming for flex photos, and we got plenty. We took a short break there before moving on.

We passed a meadow and then headed back into the trees. There was still so much mud, even in September. Many of the puddles seemed small, but then you would look at the trees next to them and they would be covered in mud for the bottom few feet. It was evidence of people enjoying the puddles when they were bigger in the spring and early summer.

It had been a long day, with lots of time spent on Bald Mountain. The sun was going down already, though it wasn't very late. Winter was definitely on its way. We passed through another meadow, and we came up to a patch of mud that was the Mother of All Trenches. We got out to check it out.

The main mud pit was thick, wet mud that was still shaped in tire tracks from the people who were there before us. It looked like it probably never settled down to a flat patch of mud. It was so thick, and very slick. The bypass next to it was tight between the trees.

Monica went at it first, trying to climb the rock on the other side to get out of it. With muddy tires, it wasn't possible with any sort of finesse. She backed out, and everyone else was making decisions about trying the mud or going around.

With a bit more momentum, Monica made her way through with spinning tires at the final couple of feet to climb the rock. What a blast! The mud didn't fall off of her tires -- it was really sticky.

AJ rolled his windows up and decided to go for it. His longer wheelbase definitely helped, and he gave it more speed to blast through the pit and up and over the big rock. He was all smiles on the other side.

Frank blasted through it next with a lot of momentum, really going for it. We heard a pop or bang on the way through, but it wasn't exactly timed with when he was at the rock. He missed a tree by about an inch and then found himself on the other side. He checked things out, but didn't see anything out of the ordinary with his steering components.

Julie, Walt, and Roger decided to skip on that nasty mud pit and work their way through the bypass. It wasn't easy, with trees a little too close all the way through. Roger ran into a tree but didn't suffer any damage. We were all through!

The sun was setting when we got to the trailhead. We aired up there, holding onto the light. Roger, Walt, and Julie left, and then Monica, Frank, and AJ left soon after. It seemed like we'd had a successful day even though it was completely dark and we had a ways to go to get back to civilization.

Frank drove through the washboard curves of the dirt road to get back to the pavement. When he hit the pavement, his front tires toed in and he looked like he was going to go end over end. He slammed on the brakes and managed to limp to the shoulder of the highway. He found the nearest campground, the Big South Campground. The three of us stopped to make sure he was okay.

Luckily, Frank survived. His Jeep was another story, though. Going over his steering components in the dark, it was easy to see the issue. The lower bracket for his track bar was hanging off, no longer attached. We talked about how to get him home with ratchet straps and chains, but there didn't seem to be a safe way. We were still 48 miles west of Ted's Place, and he was still an hour south of there. No one had cell service, either. He limped the Jeep over to a wide spot away from campsites, made friends with the campers near there, and hopped in Monica's Jeep for a ride home.

We made it to Ted's Place for gas about 10 minutes before they closed. Then we headed back home. Before Frank was home he found someone who would help him out the next day with a truck and trailer, and he had his Jeep home by mid-day on Sunday. Never underestimate the kindness of the offroad community! Even though the day didn't end well for Frank, he still had a good time. We all did, even with the mud. 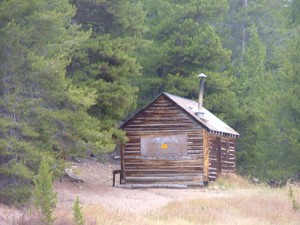 Led by Monica I.
We’d been trying to do Green Ridge for a few years, but weather kept getting in the way. In fact, we already had it scheduled as a spring run but the trail didn’t open in time due to a particularly snowy winter. We rescheduled it, and we were finally going…
Join Us!
If you aren’t a Member or Subscriber, you can’t see all of the content on this site. Get membership information to see why this site is best when you join and log in