We'd been trying to do Green Ridge for a few years, but weather kept getting in the way. In fact, we already had it scheduled as a spring run but the trail didn't open in time due to a particularly snowy winter. We rescheduled it, and we were finally going to see it.

Unfortunately, the weather wasn't going to cooperate. It was fairly overcast, and it would stay that way all day. We wouldn't see the sun, and it would start drizzling just after lunch. Still, the extra water kept things muddy.

There were lots of mud puddles, and we could definitely see how it would get a little crazy in the spring. You could see how the mud once made it all the way to the edges in places, but for us it was usually just in the middle of the trail.

We were sad to see that ATVs had made so many illegal bypasses around the muddy sections. There were well-used trails through the trees at every puddle, between trees far too close together for even a small 4x4 vehicle to fit through. Why do a trail like Green Ridge if you want to avoid the mud? It doesn't make sense.

Though there was a lot of mud, it never stopped us. We were there during the time of year when it was the least muddy, and it just made things messy. It would be a blast if you wanted to get your rig covered in mud.

It was also pretty rocky in most places. Some rocks were challenging with slick tires, too. That was a nice surprise.

The sad part was the scenery. We stayed in the trees the entire time, with one fleeting glimpse of mountains. The trail opened up into a couple of big meadows at the north end, but otherwise it was all pine trees with a small handful of aspen trees here and there.

We followed the signs provided for snowmobilers, pointing us left and right around trees in the trail. Route finding was very easy.

When we got to the intersection with 319 we took it, continuing north. We turned into the network of trails north of the Bald Mountain trail, doing some exploring. Then we decided we wanted to see all of Green Ridge so we did the north section when we came to the wooden sign on Bald Mountain. After seeing the end of Green Ridge, we took 319 yet again to the end of Bald Mountain. It took some time to do the exploring, but everyone was content.

Green Ridge was a good time, and we'll definitely head back that way to check it out in the spring. It would be a blast with a lot of mud! 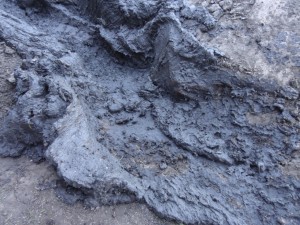 Led by Monica I.
Mud on Green Ridge? No way! It was September, and we weren’t too far into the northern end of the trail before we found a nice, big mud puddle. It was tough to say for sure, but we guessed we were in for a muddy trip back to the highway….
Join Us!
If you aren’t a Member or Subscriber, you can’t see all of the content on this site. Get membership information to see why this site is best when you join and log in