We did Green Day right after doing Minor Threat, and we felt like we were up for the challenge. We had heard that Green Day was easier because of all of the bypasses, but for most of us who didn't take the bypasses it ended up being much harder.

We took the difficult entrance on the way in, following the metal Green Day sign. We went up a hill and crossed over a rocky section and we were treated to some spectacular views. We could see Prostitute Butte next to Behind The Rocks where we would be in a couple of days.

Monica went through the rocky section and headed down the hill to wait at the start of the loop. Then Bob S. came on the CB saying he needed a hand. He ended up doing a big wheel stand and getting pretty tippy, so Don jumped on the front of Bob's Jeep to provide some weight. Bob was going to ease forward and ended up lurching backward instead, tossing Don off of his Jeep and onto the rocks and dirt. Don managed a Superman maneuver, twisting in mid-air before landing.

Don ended up breaking the very tip of his thumb and scraping up his knee, but it wasn't long before he was ready to continue wheeling. Don was next in line and drove right through the rocks.

Cheryl and Kendall were next, getting flexy on the rocks and looking good.

Eric went next and got the same crazy wheel stand that Bob S. got. Though he may have been able to drive through it, it was a really close call so he decided to back down and change his line. That was close!

Andrew found a good line through the rocks, making it look easy. Then Robert was driving through it and he got himself pretty high-centered on the big rock in the middle. He managed to force himself off of it and found a better line, driving through it.

Bob R. brought up the rear, getting a nice wheel stand while easing right through it without any issues.

We turned right at the bottom and we were off to a good start, but then we accidentally exited on the easier "blue" entrance and ended up back on Strike Ravine. We turned around and took the blue entrance back in, continuing our trip around the loop.

There were some fun rocky sections, then we came to a pair of optional walls marked with the green "difficult" symbols. Monica gave one of them a half-hearted try, then backed down.

Bob S. tried the sandy ledge, bouncing around for awhile. He found a good line to the right, but then ended up stuck in front of a big tree branch. He was committed, then, and couldn't come back down. He gave it some gas pedal and made it right up, finding a good line.

Cheryl was working on the biggest wall. It seemed like she was going to make it, but then she'd slip off to the side. She gave it a lot of good tries, but it wasn't going to happen this trip.

Don tried Bob's line up the other ledge, committing himself in front of the tree branch but making it up with dirt flying.

We were at the beginning of the Boulevard and we all made decisions about which route to take. Andrew and Bob R. decided to take the blue route, and everyone else took the green route. That meant Andrew and Bob R. could relax and watch the festivities.

We started the first wall and it gave almost everyone a lot of troubles. Though we usually do every obstacle one at a time with plenty of time to watch, this time in the Boulevard was different. We ended up pairing off and continuing through the Boulevard all at the same time, making it go a lot faster. Still, it took us quite awhile -- it took 3 1/2 hours for all of us to get through the Boulevard.

Monica and Kendall both tried the Wedgy, though neither one made it through. Monica almost got there, but she didn't have the transfer case needed to get through the last bit. She ended up backing down and smelling her clutch for the rest of the day.

Kendall got in it but then slipped sideways in the Wedgy, leaning his Samurai up against the rock. He got a little bit of body damage, but it was a good try.

We all faced a few challenges in the Boulevard, but the worst of it ended up being at the exit. It was pretty difficult, and only Bob S. and Robert made it through without winching. Everyone else almost made it through, but not quite. It's a tough obstacle!

Eric was a few yards away from the exit when he was having troubles going through a relatively mellow section. His clutch was giving out and he couldn't get any further, though he tried and tried. He had to take the escape route to the blue section and skip the Boulevard exit.

Andrew had fun on a ledge in the blue section, slipping around in the dirt. Monica tried the same ledge with her lockers off and heard a loud ratcheting sound. She soon realized that it only happened when the rear ARB locker was disengaged, so she was stuck with her rear locker engaged all the way through the trip and on the highway on the way back home a few days later.

We looked at the next green section but the sun was going down and we decided to skip it this trip. It looked pretty challenging, so we'll try it next time.

We followed the rest of the loop around and exited once again out the blue side. We went back out to the Area BFE parking area, then back to Moab. It was a really awesome day! 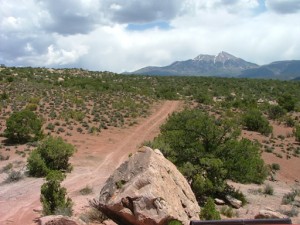 Led by Monica I.
We started this trail right after finishing Minor Threat. As always, it was a blast! Last year there were a few people who had issues with big wheelstands at the top of the hill near the trailhead. This year, everyone just drove right over everything without an issue. It wasn’t…
Join Us!
If you aren’t a Member or Subscriber, you can’t see all of the content on this site. Get membership information to see why this site is best when you join and log in